Have swear words lost their juice in literature? A single ‘f**k’ on the page is inert while, paradoxically, a well-employed minced oath – ‘fudge’ – carries more story 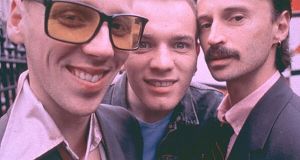 Mike O’Leary: Working my way through Trainspotting in my early teens and sounding the phonetics out turned the book into the Necronomicon. These incantations made you work for it and only revealed themselves to the grimoire’s true acolytes. You literally had to breathe life into the words

Full disclosure: nothing fills my heart nor moistens my eye quite like the stunning deployment of a swear word by someone old enough to know better. To me, a sonorous f-bomb from a be-tweeded Anglo-Irish old-boy, or a nonagenarian Kerrywoman really wrapping her lips around the word “balls”, is what smelling a newborn’s head is to many others. “Raindrops on roses and whiskers on kittens. Dotey old ladies talking about s****ing. These are a few of my favourite things.”

Initially our teen drama Eipic was conceived and pitched as a pre-watershed show to go out on TG4 around 6pm. During the development process, however, we found the stories we wanted to tell demanded an authenticity that would have been beyond our reach within the pre-watershed rules of compliance.

That’s not to say we were gagging to tell tales of back-alley abortions. But we knew there was no point going after our target audience unless you were speaking their language. Sure, they may understand the Irish, and there’s always the English subtitles, but they’ll never engage on a social- realist level unless there’s a little bit of, uh, French.

In screenwriting, economy is king. We’ve all witnessed the power of loner expletives on screen, such as the infamous “F**k Scene” in the fourth episode of the first series of The Wire, a glorious four minutes and 29 seconds of poetic profanity in flight is a masterclass in both comedy and genre self-reflexivity.

Still, it is the nature of the form that these swear words get to exist in specific co-ordinates in time and space. But what of the written word? “Thou clay-brained guts, thou knotty-pated fool, thou whoreson obscene greasy tallow-catch!” Anything?

It’s rare that a dictionary trumps Shakespeare in terms of electric exhilaration, but guaranteed that time you looked up the medical terms for both genitals in your first dictionary defecates all over reading that sentence just now . . .

So. Have swear words lost their juice in literature? A single “f**k” on the page is inert while, paradoxically, a well employed minced oath – “fudge” can carry more story.

There is, I think, an exception. Nay, a saviour: phonetic slang. We Irish and our Scottish cousins are exceptional at it. It’s basically the Middle Ages all over again. We are first the preservers and then propagators of arcane knowledge, of mystical power. Roddy Doyle is our Skellig Michael, Irvine Welsh our Iona, Ross O’Carroll Kelly our gilded icon of “Chroist!”

Working my way through Trainspotting in my early teens and sounding the phonetics out turned the book into the Necronomicon. These incantations made you work for it and only revealed themselves to the grimoire’s true acolytes. You literally had to breathe life into the words.

Phonetic swearing in literature still manages to shock and jar because it hijacks your body in their creation. It’s speaking in tongues. The reader comes down with a case of the Charismatics but all fooks and farks in place of Ancient Sumerian.

Does my theory give any insight into the function of unnecessary language? The received wisdom is that swearing only betrays a dearth in vocabulary, but the complete opposite was found in a recent study, Taboo word fluency and knowledge of slurs and general pejoratives: deconstructing the poverty-of-vocabulary myth by Kristin L Jay and Timothy B Jay. (Poor Timothy: unfortunately named for this study or an amazing example of nominative determinism?) Those with a healthy repertoire of curse words have a richer vocabulary overall than the pearl-clutchers amongst us.

Whatever the language, how swearing operates is akin to lifting the heaviest weights in the gym. You look insane if you do it all the time, and best avoid around small children. But, used correctly, it jars, it disrupts, it tears at the fibres of your stale language muscles.