Stephen King was the first writer to embrace the medium 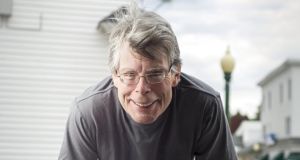 The first books about the Kindle began to appear around the same time as the Kindle was launched at the end of 2007. Stephen King’s novella Ur was written specifically for Amazon’s e-reading device and was published exclusively in digital format little more than a year after the device was released.

However, computer scientists had been tinkering with the technologies for digital print since the early 1960s, and writers had always been quick to respond to innovations like Project Gutenberg, which digitised existing titles, and hypertext, which enabled readers to delve into deeper realms of storytelling.

The conceit for Douglas Adams’ The Hitchhiker’s Guide to the Galaxy, published in 1979, revolved around the eponymous electronic guidebook. Jeanette Winterson’s novella The Powerbook (2000), meanwhile, centred on an e-writer who opened up levels of multiple reality for readers based on their preferences and offered a prescient exploration of the way in which digital technologies shape modern identity.

But for both Adams and Winterson digital reading remained an idea, rather than an actuality. For Adams, the guidebook’s ability to renew itself based on evolving contemporary events made it far more sophisticated than existing technologies; a futuristic dream. Winterson, however, did integrate an awareness of the materiality of the virtual universe. The Powerbook uses a combination of emails, instant messages, and fragments to tell a story that is divided into short chapters bearing headings like ‘New Document’ or ‘Empty Trash’.

It was Stephen King who first embraced the medium of digital publishing with the publication of Riding the Bullet in 2000. The short story was sold exclusively in ebook format, and was the first mass-market publication available for download. King’s popularity ensured the technological experiment would be a success, at least numerically: more than 400,000 copies were sold in the first 24-hours of its publication. Indeed, it was so popular that the software actually couldn’t handle the demand, and the release system crashed several times. The digital page was not a particular success either. Reviews were critical of the effort involved in reading on a screen. Some also suggested that the virtual nature reflected a lack of substance in the thriller’s themes.

Seven years later, Amazon launched the Kindle, and King returned to endorse the technological advance with the publication of Ur, a meta-fictional novella about the Kindle itself. In Ur a jilted English lecturer finds himself dealing with dark mysteries when his newly purchased Kindle allows him to access books and newspapers from alternate worlds. The publication came about by invitation of Amazon, and King wasn’t surprised by the criticisms that followed.

“I decided I would like to write a story for the Kindle,” he wrote in defence of himself, “but only if I could do one about the Kindle. Gadgets fascinate me, particularly if I can think of a way they might get weird . . . it was also before the inoffensive little ebook reader . . . grew into something that now seems to threaten publishers, book stores, and even the authors themselves.”

Ebooks, meta-fiction, hyper-text, Kindles, digital-exclusives: the words are as ubiquitous as the technologies themselves these days. Books of fiction and non-fiction now provide added digital dimensions as standard – zoomable maps, soundtracks, and so on – and writers rarely feel the need to self-consciously comment on the near-universal reality of e-reading.

French publisher Paul Fournel, however, has just written a delightful little satire, Dear Reader, which addresses the e-reader itself as a character; whether it is a villain or a hero, the publisher-protagonist is not quite sure. When his intern presents it to him in lieu of the usual weighty stack of manuscripts he is suspicious. When he turns it on for the first time, he is disgusted. “It is cold to the touch... If I look at myself in the mirror, under my chin, I look like a ghost. I am the ghost of readers past.”

Still, even this sceptic is soon amazed by its facility, “730 grams . . . So that’s the final weight of world literature.” The attractive little paperback from Pushkin Press weighs just under 200 grams. I am sure Fournel made sure that it would fit just as easily into a jacket pocket as an e-reader would.