A generation of Canadian, Irish and indigenous writers is to perform in UCD and NLI 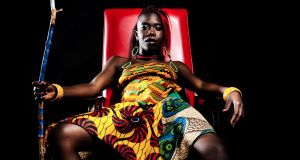 D’bi.young Anitafrika, the award winning-playwright and actor, who brings her acting talents to the world of Dubpoetry in a crackling fusion of performativity

Have you noticed? The world keeps changing at a constant, breathtaking pace. And literature, by necessity, keeps changing with it. A generation of the Canadian, Irish and indigenous writers leading the change are gathering this week in Dublin at University College Dublin and the National Library of Ireland for what is being described as a “generational” event. Who, exactly, are today’s avant-garde?

Consider Christian Bök, the internationally bestselling, experimental author headlining the Text/Sound/Performance conference at UCD. Nasa just deposited a microchip containing one of his poems into the soil of the planet Mars. Dr Bök connects to space exploration because of the way his poetry fuses cutting-edge science with cutting-edge literature. Meanwhile, a prominent Canadian dance company is touring with a musical adaptation of his poetry, highlighting its sonorous qualities.

His most recent project, that he will discuss at UCD, is called The Xenotext Project. He aims to create the world’s first “living poetry” by injecting a chemical alphabet into the DNA of a bacterium. If he is successful, the poem will remain in the bacterium across countless generations into the future. Bök is, in effect, striving to engineer a life-form so that it becomes a durable archive for storing a poem, fulfilling that old literary goal of an art work that might conceivably survive forever.

Consider, too, the Sila Singers, an Inuit throat singing (“katajjaq” in Innu) duo consisting of two women, Jenna Broomfield and Malaya Bishop, originally from the Arctic regions of Nunatsiavut and Nunavut, Canada, respectively. Reflective of the cultural surge of what is being described as the “Indigenous Renaissance” in Canada, the pair will bring their astonishing music to Dublin for the Text/Sound/Performance conference.

It is worth noting that, like the penal laws in Ireland, the Canadian government banned all forms of cultural expression by indigenous groups across the country for more than 100 years. Throat-singing is one of the traditional Inuit cultural practices that was affected by this ban. These punitive laws have been acknowledged by the government as part of an attempt at grim “cultural genocide” and, subsequently, repealed. This cultural shift has opened the possibility for the world to experience the laughter, joy, and mesmerizing complexity of Inuit throat-singing. The duo sing traditional songs and newly composed ones that they have created. They have been noted as a dynamic duo and the audience can feel the incredible energy they have together.

Consider, finally, D’bi.young Anitafrika, the award winning-playwright and actor, who brings her acting talents to the world of Dubpoetry in a crackling fusion of performativity. With a piercing wit and eruptive stage presence, Anitafrika transforms the stage into a place where the violence of the world is acknowledged, dissected, and totally rejected. New futures seem to emerge from her clarion call.

At UCD, she will highlight what she calls the Anitafrika Method, an intersectional Black-feminist praxis of which she is the creator. Addressing issues of gender, sexuality, race, class and the human experience, Anitafrika leads a theatre of ritual and self-recovery. She is truly a global citizen and creates opportunities for artists to move beyond their confining borders. She curates international residencies for artists the Caribbean, North and South America, Africa and Europe, and has developed the Anitafrika Retreat Centre where she teaches artists globally.

So, truly, from science-art collaboration to radical transnational culture to the astonishing work emerging from the Indigenous Renaissance, the avant-garde are coming to Dublin. This specific event is a unique fusion of Canadian, Indigenous, and Irish authors and artists, highlighting the special connections and links between these communities. Given Canada’s and Ireland’s shared proximity to neighbours in the midst of, shall we politely say, questionable cultural transformations, who are retreating from the world stage, perhaps it is time to give Canadian-Irish relations a rethink?

To that end, 125 of the top Canadian and Indigenous writers and literary critics are coming to Ireland for a conference festival. They will be partnered with approximately 75 (and counting) Irish authors through the new Associated Writing Programmes Ireland. Irish novelist and poet, Paul Perry, has called it “probably the most stunning, generational conference to hit Dublin.”

There will be free and public readings at UCD, Poetry Ireland, and the National Library of Ireland. There will be workshops and lectures at UCD, alongside key performances by the likes of those profiled above.

The Canadian avant-garde event is called TEXT/SOUND/PERFORMANCE, and is part of the outreach work of the Craig Dobbin Foundation. Dobbin was a Canadian billionaire and philanthropist who established the position of a one-year Professor of Canadian Studies in the UCD School of English, Drama, and Film. Dobbin’s ambition was to cultivate the cultural links between Canada and Ireland, which is what we are hoping to do. By highlighting, in particular, the cutting edge of literature, this conference event seeks to harness the incredible and diverse energy of the contemporary world and to test and expand the limits of literature and language art.