At Swim, Two Boys: from page to stage 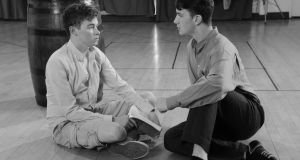 A rehearsal scene from At Swim, Two Boys

At Swim, Two Boys by Jamie O’Neill, published in 2001 after reportedly securing the largest-ever advance for an Irish author, is one of my favourite modern Irish novels, so news of its stage adaptation is most exciting. It is also apt, given its resonant subject matter of a gay love affair set against a backdrop of the Easter Rising and the first World War.

Adapted by Tim Scott and directed by Seán Roper-Nolan, the production, with a cast of 20, will be staged at the Samuel Beckett Theatre, Dublin, on June 6th-18th. For a book that is out of print, it appears still to be prominent in the cultural imagination, having inspired a dance version in Wales in 2005, a French-language version in 2014 and a musical workshopped in London’s West End; atswim.ie.

Another adaptation to note is Máire Doyle’s dramatisation of two John McGahern stories, All Sorts of Impossible Things and A Slip Up, in Theatre@36, Teachers’ Club, Parnell Square, Dublin, on June 7th-11th; tickets.ie.

The boundary between novel writer and playwright is clearly a flimsy, if not fictitious, one. On Thursday, June 2nd, the Irish Cultural Centre in Paris staged WexFour, a quartet of one-act plays by John Banville, Eoin Colfer, Colm Tóibín and Billy Roche commissioned two years ago to celebrate Wexford Arts Centre’s 40th anniversary; 451 Editions also launched its ebook of WexFour after the show. Lia Mills and Celia De Fréine, meanwhile, better known as a novelist and a poet, present two short plays, Katie and Beth, with a Dublin 1916 backdrop, in the Maureen O’Hara Studio in Dundrum’s Mill Theatre on June 6th-11th, at 1pm.

Anne Enright’s The Green Road has won the €15,000 Kerry Group Novel of the Year Award at Listowel Writers’ Week. She also won in 2008 with The Gathering. Eamon Grennan won the €5,000 Pigott Poetry Prize for There Now.

Is Lynne Graham the most successful Irish author you’ve never heard of? With more than 35 million books sold, this month she publishes her 100th novel since her debut, Bittersweet Passion, in 1987. Graham, from Ballymena, Co Antrim, was the bestselling Mills & Boon author in 2013, 2014 and 2015. The mother of five said of her achievement: “I’m delighted to have reached such an important landmark in my career. I’ve always been passionate about writing and I’m so lucky to be able to make a living from doing what I love most.” Bought for the Greek’s Revenge is available to buy now from millsandboon.co.uk and to download as an ebook.

Granddaughter of a 1916 rebel and daughter of a historian, Bairbre Tóibín could have been born to write The Rising, a novel about the Easter Rising in Enniscorthy. She is also, of course, a sister of the writer Colm Tóibín, which got me thinking about other sibling scribblers. Off the top of my head, I came up with the Brontës, of course, Charlotte, Emily and Anne; Margaret Drabble and AS Byatt; Frank and Malachy McCourt; and William and Henry James. Who else am I forgetting?

The deadline for the 2016 Michael McLaverty Short Story Award, run by Belfast’s Linen Hall Library, is June 30th. This year’s theme is Lost Fields and the prize is £2,000. The judges are author David Park and Patsy Horton of Blackstaff Press. Park said: “I have a long-held admiration for the work of Michael McLaverty, a fellow schoolteacher writer, and his short stories played their part in my early development as a writer.”

The archive of McLaverty (1904-1992), one of the foremost proponents of the Irish short story, is housed by the library. Previous winners of the award have gone on to publish further works: Aiden O’Reilly (2008, Greetings, Hero); Michèle Forbes (2010, Ghost Moth); Mandy Taggart (2012, The Man of the House); and Annemarie Neary (2014, Siren); linenhall.com.