A note-perfect homage to ‘American Psycho’, and other murders

A round-up of the best new crime thrillers 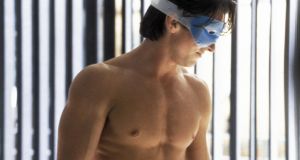 Christian Bale as Patrick Bateman in American Psycho, one of a series of fictional murderers imitated by a serial killer in Pierre Lemaitre’s Irène

Pierre Lemaitre’s Alex earned rave reviews last year, not least for the way Lemaitre reworked the tropes of the conventional serial-killer novel to create a clever police procedural that worked as a superb thriller even as it confounded readers’ expectations of the genre. The follow-up, Irène (MacLehose, €18.60), is equally clever, as the diminutive Parisian detective Camille Verhoeven is initially confronted with a murder scene so horrific that it puts him in mind of Goya’s Saturn Devouring his Son .

Were Verhoeven the son of an author rather than a painter he might have recalibrated his instincts: it soon emerges that the carnage is a note-perfect homage to the double murder carried out by Patrick Bateman in Bret Easton Ellis’s American Psycho .

Pitting his wits against a killer whom the media quickly dubs “the Novelist”, Verhoeven – who is distinctly unimpressed by the crime-fiction genre – uncovers a series of murders that mirror killings detailed in classic crime novels by James Ellroy, John D MacDonald and William McIlvanney.

Just as the reader begins to suspect that the novel is a macabre compilation of the genre’s greatest hits, however, Lemaitre pulls a switch that forces the reader to reassess everything that has gone before. Translated by Frank Wynne, Irène builds on the considerable promise of Alex and confirms Camille Verhoeven as one of the most intriguing protagonists to emerge in crime writing in recent years.

Set in Los Angeles in 1929, it features Raymond Chandler, Marlowe’s creator, and the policeman Tom James, whom Cooper reckons to be a likely model for the fictional private eye.

Working as an executive for Dabney Oil, Chandler is asked by his employer to investigate how a religious cult has managed to bilk Clifford Dabney, the oil baron’s nephew, out of his personal fortune. Drinking heavily and distracted by his failing marriage to Cissy, Chandler ropes in James and his secretary Muriel Fischer, and the trio set forth to discover the whereabouts of Dabney’s money.

Inspired by real events, the story is crisply realised, not least because Cooper resists the temptation to twist her fictional representations of Chandler, James and Fischer into a prototype Philip Marlowe. There are no hardboiled, quip-happy heroes here; instead we get a realistic appraisal of a difficult investigation in a fascinating time and place.

The Day of the Dead (Europa Editions, €15.75) is the fourth novel by the Italian author Maurizio de Giovanni to feature Commissario Ricciardi, a police detective with an unusual quirk: he possesses “the Deed”, a “grievous curse” that allows him to see the ghosts of the violently killed and hear their last words.

Set in Naples in 1931, against the backdrop of a forthcoming visit to the city by “Thunder Jaw”, aka Benito Mussolini, the story opens with the discovery of a dead scugnizzo , Matteo, a starving street urchin who appears to have eaten poisoned food. Under pressure from his superior to sweep the death under the carpet, Ricciardi is perturbed not to see the boy’s ghost at the scene of his death. Was his corpse moved after he died?

From this single thread de Giovanni spins a languid tale that is haunting less for its supernatural overtones than for its depiction of the harrowing poverty of an abandoned underclass, contrasting the bitter hand-to-mouth existence of abused children with the splendour and luxury of the socially respectable citizens who feed on the children’s desperation.

The BBC broadcaster and political commentator James Naughtie sets his debut novel, The Madness of July (Head of Zeus, €18.75), in London during in the 1970s, opening proceedings with the discovery of a corpse in the basement of the Houses of Parliament. When it is revealed that the dead man is a rogue American spy in Britain on personal business, and the phone number of foreign-office minister Will Flemyng is found in his pocket, suspicion falls on Flemyng, who is himself a veteran of the cold war’s “grand old game”.

Naughtie’s insider knowledge of the workings of Westminster and Whitehall gives The Madness of July a satisfying verisimilitude, and he beautifully re-creates both a sweltering London summer and the Highlands of Scotland.

Despite all the spycraft and triple-crosses, and our hero’s name and Scottish ancestry, this is not a spy thriller of the James Bond variety. Naughtie is less interested in pacy action and violence than he is in exploring place and character, and, even if The Madness of July meanders at times, it is a measured tale of political intrigue and psychological depth.

Set in Ireland in 1984, Nicola White’s In the Rosary Garden (Cargo Publishing, €12.85) centres on the discovery of a dead infant in the grounds of a convent. Given the place and, particularly, the time, Detective Vincent Swan has to proceed carefully as he investigates how the child was killed and why it was left to be discovered in a convent. Matters are further complicated by the fact that this is not the first time that schoolgirl Ali Hogan has discovered a dead baby.

White’s debut – the novel won the Dundee International Book Prize late last year – has haunting echoes of recent Irish history, and White has no compunction in pointing the finger at the patriarchal society that plays a significant part in the tragedies detailed here.

The novel is by no means a polemic, however. An unusual but absorbingly twisting narrative is hugely enhanced by White’s creation of Detective Swan, a complex man whose own frustrated paternal instincts ensure that a highly politicised case becomes very personal indeed.