Bloody Sunday, 1920: ‘By their destruction the air is made sweeter’ 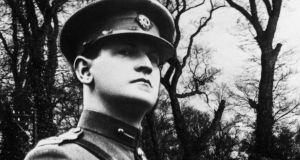 Michael Collins: “there is no crime in detecting and destroying, in war-time, the spy and the informer”

Why did Bloody Sunday happen? To answer this question, we need to go back to 1918 when Michael Collins was introduced to Eamon Broy. Broy was a detective in ‘G’ Division, the intelligence department of the Dublin Metropolitan Police, stationed at Brunswick Street (Pearse Street) Station. For some time, he had been passing on intelligence to the Volunteers, most notably sending word of the ‘German Plot’ arrests. But he wanted to do more.

The two men met in Drumcondra and had a long discussion about what their next steps should be and both agreed that force was the only chance they had. Those immediately in their sights were the detectives of ‘G’ Division. If the Volunteers were going to wage a war, they would not just be taking on the British military but the British intelligence system as well. On Broy’s advice, warnings were to be sent to the ‘G’ men to cease their activities against the Volunteers.

By this time, Collins had been appointed director of intelligence. He quickly began to expand his organisation, recruiting young men, such as Charles Dalton, to be his intelligence officers. At the same time, other Volunteers were recruited who would act on the information gathered. They would be the assassins, Collins’ ‘Squad’.

Their first target was Det Sgt Patrick Smith, who was shot outside his home in Millmount Avenue, Drumcondra, on July 30th, 1919. He died some days later. This was followed on September 12th with the shooting of Det Officer Daniel Hoey, yards away from Brunswick Street Station.

Collins’ intelligence network continued to expand. Determined to crush Collins and the IRA, things began to change with the appointment in mid-1920 of Brig-Gen Sir Ormonde de l’Épéé Winter, ‘The Holy Terror’, as chief of British army intelligence and deputy chief of police in Dublin.

Mrs Caroline Woodcock, whose husband was a lieutenant colonel of the Lancashire Fusiliers, moved to Dublin following her husband’s arrival in May 1920. They lived in 28 Upper Pembroke Street together with army officers and British agents. In her memoir about Bloody Sunday, she described their activities:

“Others, like Lieutenant William Lorraine ‘Tiny’ King were members of ‘F’ Company Auxiliary Division, based in Dublin Castle. Captain Jocelyn Lee ‘Hoppy’ Hardy was a member of the Connaught Rangers attached to ‘F’ Company.”

In late 1920, they could have destroyed Collins’ entire organisation. They arrested three of Collins’ key men, Tom Cullen, Liam Tobin and Frank Thornton. So confident were the authorities that they were gaining the upper hand, prime minister Lloyd George, in his speech at the Lord Mayor’s Banquet in London on November 9th, stated;

“There [Ireland] we have witnessed a spectacle of organised assassination of the most cowardly character . . . But, at last, unless I am mistaken by the steps we have taken we have murder by the throat.”

The extent of Collins’s network was amazing. Information on the agents and officers came from everywhere. For example, Lily Mernin, also known as ‘Lt G’, worked as a typist in Dublin Castle. With a friend, she would go to the whist drives held in Dublin Castle and talk to the Auxiliaries and officers. She would then go for lunch with IRA intelligence officer Frank Saurin, and identify those she had been talking to. She obtained the names and addresses of some of those who would be targeted on Bloody Sunday.

But Mernin was one of many. Members of Cumann na mBan were essential in gathering information. Molly O’Reilly worked as a waitress in the Bon Bouche restaurant on Dawson Street, from where she also got names and addresses of British agents. Madge Clifford, a member of the Central Branch, Cumann na mBan, pretended to be looking for digs in a quiet part of the city and would carry out surveillance of the properties to see who was living there. Even within their own ranks, the British were not safe. John Reynolds, a member of ‘F’ Company Auxiliaries, was regularly giving Collins information about his colleagues.

With the information gathered and with the British agents getting closer, Collins decided to strike. The plans for Bloody Sunday were put in place. Amongst those involved in the planning were Collins, Dick McKee, commandant, Dublin Brigade IRA, Peadar Clancy, vice-commandant, Oscar Traynor, Frank Thornton and Liam Tobin. Lists were drawn up of potential targets, but Collins did not have the final say in this matter. That fell to Cathal Brugha who, as minister for defence, gave the final sanction. He had at least 15 names taken off the original list, “if to his mind there was the slightest loop-hole for uncertainty about an agent or spy, then that individual could not be dealt with”.

Thirty-five names were on the final list. This was a massive operation, one that could not be carried out by the Squad and Intelligence Unit alone. Secrecy was of the utmost importance and few were privy to plans. Only the night before, specially chosen men from the four Dublin battalions of the IRA were told of what they were to do the next morning. Members of Cumann na mBan were also informed they would be needed for duty. The three Cooney sisters, Annie, Eileen and Lily were told by Christy Byrne, ‘C’ Company, 4th Battalion, to be at Mass at University Church on St Stephen’s Green and wait for him and his men to take the guns after the operation.

That night, the IRA was dealt a severe blow. Dick McKee and Peadar Clancy had met with Collins at Vaughan’s Hotel on Parnell Square to go over the plans one last time. Another man arrested that night was Conor Clune from Clare. He was a Gaelic Leaguer, with no connection to the IRA who was in Vaughan’s Hotel when it was raided. Unfortunately, he was in the wrong place at the wrong time.

The next morning, groups of men made their way to their designated locations, ready to act at the decided hour. At 9 o’clock, knocks came to the doors of a number of houses on the south side of the city, followed soon after by the sound of gun fire.

At 22 Lower Mount Street. Lieut Angliss was shot dead. Lieut Peel barricaded himself in his room and managed to evade being shot. Two Auxiliary officers, Cadets Garniss and Morris were killed whilst returning to Beggars Bush barracks to get reinforcements. At 117 Morehampton Road, Lieut MacLean and Thomas Herbert Smith, the landlord, were shot dead, a Mr Caldow was wounded. At 38 Upper Mount Street, Lieuts Bennett and Ames were killed.

At 28 Upper Pembroke Street, Maj Dowling and Capt Price were shot dead; Col Woodcock, Capt Keenlyside, Col Montgomery and Lieut Murray were all wounded. Capt Patrick McCormack and Mr Leonard Wilde were killed in the Gresham Hotel. Capt Baggallay was shot dead in 119 Lower Baggot Street. Lieut Fitzgerald died at 28 Earlsfort Terrace. At 92 Lower Baggot Street, Capt Newbury was shot dead in front of his female companion, some sources state she was his wife. As quickly as it had begun, the operation was over.

The result: 14 men were dead, Montgomery later died of his wounds and five wounded. The IRA suffered one loss, Frank Teeling, a member of the 2nd Battalion, Dublin Brigade. Teeling was seriously wounded. One who got away was ‘Hoppy’ Hardy.

When word got out about the shootings, panic set in. Dublin Castle was a hotbed of activity, with officials and their wives all going there for protection. Someone was going to pay for what happened that morning. That evening in Dublin Castle, three prisoners were taken to the guardroom to be interrogated. Those three men, Dick McKee, Peadar Clancy and Conor Clune, were killed while in police custody. The castle was quick to release an account of what happened:

“At about 11 o’clock to-day, Richard McKee, TC Clune, and Peter Clancy were killed in an attempt to escape from the old Detective Office, Exchange Court, Dublin, where they were in police custody.”

Nothing could have been further from the truth. But with their deaths, the killing finally ended.

To go back to the question, why did Bloody Sunday happen? Let the last words be those of Michael Collins.

“My one intention was the destruction of the undesirables who continued to make miserable the lives of ordinary decent citizens. I have proof enough to assure myself of the atrocities which this gang of spies and informers have committed. Perjury and torture are words too easily known to them.

“If I had a second motive it was no more than a feeling such as I would have for a dangerous reptile.

“By their destruction the very air is made sweeter. That should be the future’s judgement on this particular event. For myself, my conscience is clear. There is no crime in detecting and destroying, in war-time, the spy and the informer. I have paid them back in their own coin.”