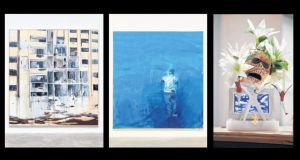 From left, Apartments Aleppo (2016); and Over Our Heads the Hollow Seas Closed Up (2016), both by Brian Maguire; and The Aquarius Monument by Alex de Roeck from Small . . . Far Away. Maguire images courtesy the artist and Kerlin Gallery

Over Our Heads the Hollow Seas Closed Up – Brian Maguire
Kerlin Gallery, Dublin
★★★★

With a practice rooted in expressionist painting, Brian Maguire has consistently addressed the experiences of society’s outsiders: the marginalised, alienated, ostracised, dispossessed, abused and discarded. Underlying his stance is a distrust of institutional authority and values, on a par with Michel Foucault’s critique of the nature and functioning of social structures.

Maguire’s subjects – from prison inmates to young people in Brazil’s favelas to hundreds of women murdered in Ciudad Juárez – are often set up and victimised by malign powers over which they have no influence whatsoever.

Making paintings about desperate migrants trying to escape horrific circumstances and reach Europe is a tricky proposition. In fact, initially Maguire had in mind the plight of Latin Americans perishing from heat exhaustion as they tried to make their way north. He then found that something similar was happening on Europe’s doorstep. But how to visualise what is going on without aestheticising the suffering of others, making it the subject of voyeuristic contemplation or implicitly flattering your own sense of moral superiority by conspicuously aligning yourself with the underdog, at no cost to yourself?

Taken as a body of work, this exhibition tries to formulate a way of doing so, all the while remaining alert to the pitfalls. Maguire’s title is from Dante by way of Primo Levi’s If This Is a Man. He points to Levi’s insistence on our common humanity in the midst of monstrous circumstances.

Maguire’s Apartments Aleppo is an almost formal, grid-like depiction of a destroyed apartment block in Aleppo, for so long a thriving centre of commerce. The missing skin of the building reveals a network of interrupted domesticity, of lives lost or thrown into chaos. Aleppo was a focus for the popular uprising during the Arab Spring, but optimism has given way to tragedy and the cruelty of protracted conflict fuelled by vested interests. Maguire’s implication is that some of the inhabitants of Aleppo’s blocks are likely to have drowned in the Mediterranean trying to reach a place of safety.

There’s a certain austerity and deliberation to his approach. Any expressionist urge is held in check. More than in his early work, perhaps, he acknowledges the complexities. Maguire is trying very carefully to point to our responsibility to address the problems.

Fifteen artists, two curators, two group shows on two floors of one modestly sized gallery: it’s a lot to take in, but Veins and Small . . . Far Away are crammed, in a good way, with good things. The curators are Davey Moor and Peter Prendergast. Veins is downstairs. It features seven artists whose work “peels back the layers”, whether literally or metaphorically. They all occupy an indeterminate space between painting and sculpture. It is rare and refreshing to see so much sculptural work assembled in a gallery.

Estonian-born Riin Kaljurand graduated last year from NCAD and featured at the RHA Annual Exhibition this year. With considerable elan, she makes three-dimensional collages using layers of dried acrylic pigment, which she cuts, folds, drapes, scrapes and draws into. With links to fabric and textile art, and impressive eye-hand co-ordination, there’s a nice lightness to the results, in which free-floating images seem to magically materialise in space.

Kaljurand’s work is a first cousin of Susan Connolly’s partially disassembled paintings. Connolly too liberates the paint from its support and allows it to unfold in space, anatomising the body of the painting. From there, we move into a sculptural realm of three-dimensional solidity, even if there’s a fluid quality to Cecelia Dannell’s stalactite-like plaster forms. The other artists are Helen Hughes, Eimear Murphy and Doireann Ní Ghrioghair, the last of whom makes playful, monumental pieces, referencing equally the materials and forms of big architectural structures and toy building blocks. Her constructions anticipate what’s to come in the second show.

Upstairs in the building’s beautiful, wood-panelled drawing room, Small . . . Far Away rounds up eight proposals for public monuments. Artists were invited to submit detailed plans, background notes and maquettes. Unusually, the normal dictates of health and safety held little sway, as indeed did the laws of physics. “The structures,” read the guidelines, “will not conform to safety guidelines nor health-code regulations . . . There shall be a lengthy period of non-consultation with the general public . . . The artists shall not be bound by any . . . appropriate gravitational, motional or logical laws of by-laws.”

The result is a brilliant installation incorporating a wall of documentary material on an imaginative group of monuments set free. All of the artists rise to the occasion. Sabina MacMahon, for example, submits a project by Leonora Byrne, a monument to her geologist relative Annie-Honoria Byrne. Annie-Honoria, writes Leonora, embarked on the heroic project of analysing and numbering all the pebbles on the seafront at Bray. She aims to honour her memory with a vastly scaled-up version of a pebble of greywacke sandstone veined with quartz, which seems appropriate. The remaining proposals, from Adrian Duncan, Paul Hallahan, Noel Hensey, Vera Klute, Justin Larkin, Mark McCullough and Alex de Roeck, are as provocative, thoughtful and entertaining.

Don’t sing so close to me: Choirs in the Covid era
7