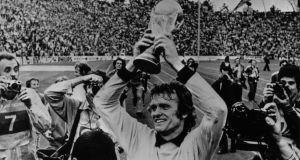 Maier holds the World Cup Trophy after West Germany’s 2-1 victory over Holland in the 1974 World Cup Final at the Olympic Stadium in Munich. Photograph: Keystone/Getty Images

Known to millions of football fans as “The Cat”, Germany’s well-known World Cup goalkeeper of the 1970s, Sepp Maier, has been hired by Tourism Ireland to encourage German visitors to come to Ireland to play golf, on the back of the holding of the British Open in Portrush.

Tourism Ireland, which promotes the island of Ireland as a holiday destination to overseas visitors, has enlisted the help of Maier, a keen golfer who played a key role in West Germany’s World Cup winning team in 1974, to showcase Ireland’s world-class golf courses to German holidaymakers.

The 75-year-old, who was a member of the Bayern Munich team which included Franz Beckenbauer and Gerd Müller and won three European Cups during the 1970s, is acting as a “golf influencer” for Tourism Ireland in 2019 and 2020.

Maier features in a new video launched to coincide with this week’s hosting of The Open at Royal Portrush – the first time the golf classic is being staged in Northern Ireland since 1951. Maier, a regular visitor to Ireland, is seen playing the famous links course as well as another championship course at Castlerock near Coleraine.

“I have had some of my best golfing experiences in Ireland and Northern Ireland – not least my hole-in-one on the Ryder Cup course in the K Club,” said Maier.

The video is being heavily promoted in Germany in print, broadcast and social media as well as via e-mail marketing.

“This video is a great opportunity for us to highlight Northern Ireland and the superb golf here to potential holidaymakers in Germany and to his many fans everywhere,” said Mr Nash.

Maier was capped 95 times for Germany and after finishing his playing career went on to act as a goalkeeping coach for both Bayern Munich and Germany.

Tourism is responsible for in excess of 5.2 per cent of GDP in Northern Ireland and supports approximately 65,000 jobs.

1 ‘I don’t need to do any of this. . .I don’t actually need to work.’
2 Anti-alcohol zeal of public health experts peppers reopening debate
3 Admission of mistake in Oxford vaccine dose raises doubts over reliability
4 Move to EU or face disruption, City of London is warned
5 Online shoppers face unwelcome tax surprise
6 Same Brexit stumbling blocks persist as Barnier travels to London
7 Cliff Taylor: Deal or no deal we are now heading for a hard Brexit
8 A tale of two pandemics for Smurfit Kappa and Greencore
9 John FitzGerald: What kind of banking system do we want?
10 Pandemic brings a halt to Zara-owner’s Irish expansion
Real news has value SUBSCRIBE