Migration of Web Summit may leave gap in tech industry

Dismay and resignation at departure of annual event that will host 30,000 in final year 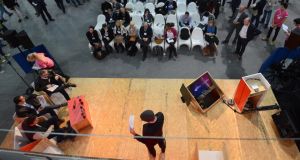 While Lisbon’s tech industry celebrated the news that the Web Summit would move to the city next year, in Ireland it was met with a mixture of disappointment and resignation.

Cofounder Paddy Cosgrave had made no secret that he was scouting alternative locations for the event, which has grown bigger each year and expects to host more than 30,000 people in its final year in Dublin.

But the movement of the event, which plays host to tech firms from startup to established tech giants, may leave a gap in Ireland’s tech industry.

Trustev founder Pat Phelan said the event would be sorely missed. “Not for dinners with Bono or Jack Dorsey, but for the amount of inbound attention it brought to Ireland with large global companies that went on to open offices here,” he said. “Life will go on, but I think in fairness it will be a loss and certainly around the attraction of late stage startups to open Irish offices.”

Even former attendees were lamenting the move, although it was tempered with some excitement about the new location.

Excited to announce #WebSummit is moving to Lisbon in 2016 http://t.co/njyaONRH03

We'll be in real trouble if the ploughing championships ever moves to Lisbon... #websummit

The Web Summit giveth and then it taketh away.

Lisbon is cheaper and warmer with a better transport infrastructure and restaurant culture than Dublin. Is the @WebSummitHQ move a surprise?

IDA Ireland described the conference as an Irish success story and said it had been “delighted to work with and to support” the Web Summit since it was set up five years ago.

“We have witnessed its growth over recent years at home and abroad and we note its next stage of development involves a summit in Lisbon next year,” said the IDA. “We wish the Web Summit well and we look forward to continuing our work with them at home and abroad.”

But despite the disappointment of the move, industry figures said they were confident Dublin’s tech sector would recover.

“It was great to have it while we did,” said Ben Hurley of the National Digital Research Centre (NDRC), adding that it shine a spotlight on Ireland, showcased companies and attracted people to the country.

However, he said he had also warned some of NDRC’s startups not to get too caught up in the hype and distraction.

“It opens up the opportunity for other events, he said. “There other ways you can do it.”

Ann O’Dea, co founder of Silicon Republic and Inspirefest, said moving the event out of Dublin may be the wrong move. “I think it may lose some of the magic,” she said. “I think part of pro appeal was Dublin.”

She warned there were bigger issues facing the industry at the moment, and although the Web Summit is a strongly supported event by the tech community, there will be other options open to the industry.

“There are various schools of thought. many people thought it was the only show in town,” she said. “There are other things to take its place.”