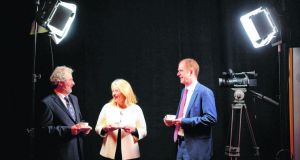 A high-profile angel investor has heavily criticised the Government for a perceived lack of support for start-ups, as criticism of Budget 2015 gathered pace yesterday among senior Irish technology funders.

Ian Lucey, whose Lucey Fund includes rugby player Jamie Heaslip among its directors, wrote on a blog that Ireland “will never be a relevant start-up hub” and the budget was “a nail in the coffin of Ireland pushing on and being a true player” on the international technology scene.

“In this budget the Government further enhanced its strategy of being a good tax haven and EMEA headquarters for foreign multinationals, while simultaneously deciding that local start-ups don’t hit their election buttons,” wrote Mr Lucey, whose investments include Plantstore.ie and the retail technology company Von Bismark.

His comments came after serial tech investor Brian Caulfield, who is a partner in Draper Esprit, chairman of the Irish Venture Capital Association and a director of The Irish Times, sparked a heated debate on Tuesday, hours after the budget was delivered.

Mr Caulfield had criticised the budget for failing to address the concerns of investors and start-ups, including issues such as incentive schemes and the need to ensure a more favourable tax regime for share options. He also dismissed the cut in capital gains tax on business sales from 33 per cent to 20 per cent as irrelevant, because it is limited to the first €1 million gain.

He argued that the Government should have moved to make the capital gains tax regime much more competitive, pointing to the UK, where the comparable rate is 10 per cent and carries a much higher ceiling of £10 million.

Mr Caulfield suggested the State should create a distinction in the regime between “passive holdings” such as property and public company shares, and tax on “entrepreneurial investments” that create jobs.

He also said the budget’s expansion of the limit for financing raised under the Employment and Investment Incentive scheme did not address the “real problem” with the initiative, which he said is its low take-up.

The Department of Jobs, Enterprise and Innovation, which wanted the Department of Finance to consider some of the issues raised by the investors, responded by saying supporting enterprise remains “a top priority for Minister Richard Bruton”.

“The Department of Jobs will continue to try and build on the progress to date and will look to improve the environment for startups, SMEs and business generally in Budget 2017,” it said.