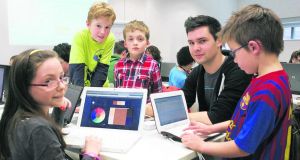 It’s a good thing the future lies in the hands of the generations to come, because phrases such as “open source coding” and “programming language” scare the vast majority of adults away. Young people on the other hand are a formidable new force in the tech world, unleashing the power of coding to build up companies and their bank accounts, making themselves heard. Not only do they have world-class coding skills, but also firsthand insights into the games the youth really want to play.

Laois student Caolan Fleming is one such coder. The sixth class pupil became Europe’s youngest Android app developer last year, having published his first game at just 11-years-old. Now aged 12, he has completed seven games, three of which are available for download on Google Play. His fourth game Rampage was launched in both iOs and Android app stores earlier this year.

Caolan started writing code when he was nine, after learning a programming language called Python.

“I always really liked video games, and I asked my dad, how do I make my own? And, he really didn’t know so he Googled it and got me a thing called Python.”

He then began downloading other people’s games, deconstructing each part and working out what every part of code did. He is now fluent in Python, JavaScript, C-Sharp and ActionScript 3 and his third app - Happy Jump - has had more than 5,000 downloads on Google play.

Like Caolan, Dublin teenager Shane Curran is also self-taught in the art of coding. The 13-year-old’s obsession with computers and technology began at age six, when he did his first Linux install. Since then he has gone on to establish a tech company - Libramatic - which was launched last year.

Despite the continuing lack of a State strategy to equip young people with IT skills, Shane has learned how to programme in multiple languages including PHP, Java, Python, Ruby, Perl and Bash.

His Libramatic system allows librarians to manage books easily, with the loaning-out and returning of books done simply by scanning the book’s ISBN code using a smartphone camera.

A number of schools throughout Ireland are currently using the system, as well as several schools abroad. The system is also available as a free app in the android playstore and in iTunes.

He is currently working on a second company - Loginify - a log in board for businesses which he is developing with a friend. Aimed at start-ups it will provide businesses with information and insights about their sites. However, he has no intentions of leaving Libramatic behind just yet, or selling it for that matter.

“People are interested in buying it but I’m not ready to sell just yet. I’ve been in discussions with distributors and want to extend its reach.”

“The company is cash flow positive, but we have a number of free users which I want to monetise.”

At the forefront of this wave of young developing talent is CoderDojo, a volunteer movement to teach kids computer programming. Its members consist of Europe’s and the world’s youngest app developers and they’re all Irish. In recent months coding clubs have spring up all over the country, full of young coders with their hearts set on disrupting the technology world.

The first coder movement started out with 30 children in Cork’s National Software Centre in 2011, swiftly followed by a second dojo in Google’s Montevetro building in Dublin. It has since spread east as far as Japan and west to Arranmore Island and across the Atlantic to Silicon Valley in California, propelling co-founder James Whelton onto Forbes magazine’s “30 under 30” list of young disruptors, innovators and entrepreneurs that are changing the world.

One of the success stories of CoderDojo has been PizzaBot creator Harry Moran. The 14-year-old Cork student went to his first CoderDojo in September 2011 and learned how to code. Less than three months later he emerged as the world’s youngest Mac app publisher when his first game PizzaBot soared to the top of the charts surpassing Angry Birds and Call of Duty. The game remained as the top paid app in the Mac App store for three weeks.

Cork student Ruth Whelan also learned the art of HTML, CSS and Java Script at the Blackrock Castle Observatory CoderDojo class. The 12-year-old created a recipe site, which she showcased at the European Parliament in Brussels earlier this year.

“I’ve always been interested in computers so my parents suggested I go to CoderDojo. My mum uses a computer for work, but by Dad is alien to them. He only got an e-mail address last month when I set one up for him.”

Also new to the CoderDojo sphere is Dublin teenager Catrina Carrigan. She began attending the club at DCU last July, winning over the minds at Intel in November with her rock star website at the CoderDojo Coolest Projects Awards. This website aims to teach users how to play a musical instrument, with an online instrument and video content to support their pop chart conquest. Not content with teaching users one instrument her project taught the guitar, piano and drums, effectively enabling users create their own rock group from the comfort of the Internet. Her next mission is to become a CoderDojo mentor.

The open source, workshop culture of CoderDojo encourages students to quickly become mentors themselves. In this way, the first generation of coding prodigies such as Shane and Harry are already working to inspire the next.

Anybody can set up a CoderDojo according to James Whelton, who believes the success of the movement is the fact that it operates outside of the Department of Education. Children therefore only learn coding if they choose to.

However, he is the first to recognise the potential of introducing coding and IT into junior certificate and leaving certificate curriculum saying CoderDojo could help with the syllabus if it ever came about.

“We have experimented with a wide array of courses and programmes and we know what works. We could lend to any curriculum being devised for schools.”

He said the movement is trying to facilitate partnerships between companies and individual clubs, to enable a club to start anywhere.

“Recently Facebook had 20 laptops which they wanted to get rid of. We arranged for them to be given to a Dojo in Croke Park.”

Whether the rapid rise in coding kids leads to Ireland producing the next Mark Zuckerberg remains to be seen, but one thing is for sure it is delivering up tech geniuses across the country, youngsters who are extremely computer-savvy and entrepreneurial. If nothing else, it is empowering young people, an important facet at a time when unemployment is reaching 15 per cent and future opportunities seem small.

CoderDojo was founded by Cork teenager James Whelton who found there was no where young people could go to learn about computers and technology. The success of the CoderDojo movement is now inspiring clubs in other sectors including engineering and architecture.

Ireland’s first Engineering Dojo took place last week after the IDA and Sligo VEC enlisted the support of 15 companies in the north-west.

Borrowing much of its ethos and approach from Coder Dojo, the fully booked out Engineering Dojo facilitated a class of young people (aged 10-14) building robots using Lego MindStorm. The Dojo aims to harness the strengths of a number of engineering companies in the North West region to create a fun learning environment, and get young people interested in engineering from an early age.

Designer Dojo, an initiative of Cork architect Paul Lee and IIT consultant Alan O’Brien, gives free 3D modeling training to kids. Launched earlier this year, the Dojo introduces kids to 3D modeling and 3D printing, bringing them through the process of creating a skate board.

“It is brilliant people are able to take the CoderDojo concept in new directions, any maybe they will think of things that we haven’t, improving the idea,” CoderDojo co-founder James Whelton says.