Contract worth £165m awarded to boost broadband in Northern Ireland 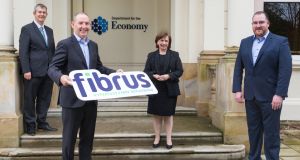 Conal Henry and Dominic Kearns from Fibrus announce the award of the Project Stratum contract with Ministers Edwin Poots and Diane Dodds.

A £165 million contract to improve the broadband service in Northern Ireland has been awarded to Fibrus Networks Ltd, the North’s Minister for Economy Diane Dodds has announced.

The British treasury provided £150 million of the overall cost of the project as part of the confidence-and-supply deal that the DUP had with former British prime minister Theresa May to keep her Conservative government in power.

The North’s Department of Agriculture is providing the remaining £15 million.

It is called Project Stratum and Ms Dodds said the new Northern Ireland company would start on the work immediately with completion due in March 2024.

The project aims to bring next-generation broadband services to premises across Northern Ireland currently unable to access speeds of 30 megabits per second or greater.

Ms Dodds said the £165 million investment, together with investment by Fibrus, would “deliver gigabit-capable broadband infrastructure to more than 76,000 premises”.

“Project Stratum will transform the broadband connectivity landscape for many of our citizens and businesses across primarily rural areas of Northern Ireland,” said the Minister.

“Full fibre broadband is key to unlocking the full economic and social potential of our rural communities and is as vital a part of our 21st-century infrastructure as power, water or transport,” he said.

“This investment enables towns, villages and rural communities to change the narrative, keep people and communities connected and facilitate the increasing demand for working and studying at home,” added Mr Henry.

He said Fibrus had already invested £65 million to bring full fibre broadband to a number of regional towns in Northern Ireland.

Mr Henry described the project as a “milestone” for Northern Ireland.

“The Stratum project, in partnership with the NI government, brings the total investment in Fibrus’s network over the next four years to £350 million, radically accelerating and extending full-fibre broadband to those that need it most.”

The North’s Minister for Agriculture, Edwin Poots, said as a rural dweller he was aware of the issues and disadvantages posed by low or poor broadband speeds. He hoped the project would “lead to better long-term sustainability of rural areas and growth in rural businesses”.

The British digital secretary Oliver Dowden said the £150 million investment by the UK government would “help deliver lightning-fast gigabit speeds not just to Northern Ireland’s towns and cities but also to rural areas stuck in the digital slow lane”.

“As the impact of Covid has shown us, it is more important than ever that we connect people to their families, jobs and services,” he said.