Cantillon: Apple’s Irish tax woes the least of its problems 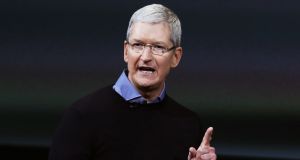 A Google search for “Apple”, “tax” and “Ireland” throws up more than 13 million results. The number of mentions of the world’s biggest tax battle in the iPhone maker’s annual results, published late on Tuesday, and on a subsequent analysts’ call with the company’s top brass? Zero.

Instead, the market has been more preoccupied with the most valuable publicly quoted company on the planet’s first annual sales decline since 2001. And, more importantly, how it hasn’t been able to take more advantage of mobile phone rival Samsung’s recent woes, specifically reports of dozens of its Galaxy Note 7 smartphones catching fire and exploding.

By mid-afternoon on Wednesday, Apple’s stock was trading down 4.2 per cent, with about $26.6 billion (€24.4 billion) wiped off its value. To add context, that’s almost double the €13 billion bill the EU has demanded Apple pay the Republic in back taxes as a result of the tech group allegedly receiving a preferential treatment by the Revenue Commissioners going back years.

You can begin to see why Apple investors are largely shrugging off the political war between Ireland, Washington and Brussels over the tax case.

They’re more concerned about the sales prospects of Apple, a company which rebounded from near bankruptcy in 1997 to one that sold a mind-blowing $216 billion worth of watches, phones and Mac computers and other products in the year to September 24th. However, that sales figure is down 8 per cent from the previous year.

Apple has forecast sales of $76 billion-$78 billion for the last three months of the year, slightly above the $75 billion it posted for the same period in 2015 and also a tad ahead of what analysts had expected.

However, the market seems concerned that the group isn’t forecasting a bigger boost on account of Samsung’s move earlier this month to stop making the Galaxy Note 7 phone. People are now wondering if the world is nearing “peak Apple”, where almost everybody that wants one of the company’s gadgets already has one.

And while analysts following Apple may not be asking too many questions about its Irish tax affairs, we are unlikely to be anywhere near “peak Apple” when it comes to that particular saga. It will most likely run for years as appeals go through Europe’s courts.