Apple fined in Japan for under-reporting earnings sent to Ireland 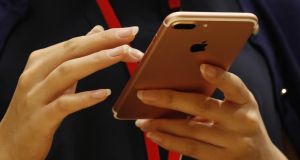 The Tokyo Regional Taxation Bureau determined that an Apple iTunes unit in Japan had not been paying a withholding tax on profits earned from fees paid by subscribers in Japan and sent to another Apple unit in Ireland.

An Apple iTunes unit in Japan was ordered to pay some 12 billion yen (€105 million) in tax by local authorities after under-reporting income, media reported Friday.

The unit has since paid the amount, the reports said.

The Tokyo Regional Taxation Bureau determined that the unit, which sends part of its profits earned from fees paid by subscribers in Japan to another Apple unit in Ireland to pay for software licensing, had not been paying a withholding tax on those earnings in Japan, according to broadcaster NHK.

Apple and other multinational companies have come under much tax scrutiny from governments around the world.

The European Union has ordered Apple to pay Ireland €13 billion in back taxes after ruling it had received illegal state aid. Apple and Dublin plan to appeal the ruling, arguing the tax treatment was in line with EU law. – (Reuters)

1 Who are Ireland’s 17 billionaires?
2 My father in a nursing home wants to gift me his house
3 Countries that fail to attract immigrants will lose out – Microsoft chief
4 Are there annual limits on inheritances or gifts to a child?
5 Proinsias O’Mahony: Should investors ‘drop their shorts’?
Real news has value SUBSCRIBE