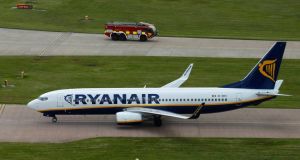 Ryanair, in line with the travel and leisure space generealy, had a remarkable day, finishing up nearly 4 per cent. Photographer: Paul Thomas/Bloomberg

Global equity markets and crude oil rose yesterday as investors snapped up riskier assets at the start of a new quarter after data showed US manufacturing expanded in June, while Japanese and European data pointed to stabilising economies.

European business surveys showed the euro zone’s prolonged economic decline may have stabilized in June and even rebounded in some areas.

DUBLIN
The Iseq finished up 1.4 per cent on the back of a positive day’s trading, slightly ahead of European markets but broadly in line with activity on the FTSE.

Ryanair, in line with the travel and leisure space generally, had a remarkable day, finishing up nearly 4 per cent.

That was despite the fact that the company announced the departure of its deputy chief executive Michael Cawley, a move that was expected to have a negative affect but one that was ultimately shrugged off by the markets.

CRH also had a good day, closing just shy of a 2 per cent hike, while most of its peers were only up marginally or down. The company benefitted from a recent switching out of emerging markets and into more established markets in which it operates.

Bank of Ireland finished up by nearly 2 per cent. AIB shed 6.5 per cent. Glanbia was down a half point with volume trading at around two thirds of last week’s trends. C&C, whose AGM takes place tomorrow, closed down a quarter point.

LONDON
UK stocks climbed the most since May 28th, following the biggest weekly gain for the benchmark FTSE 100 Index since April, as British factory and mortgage-approval data bolstered confidence in the economic recovery.

Vedanta Resources led a gauge of mining companies higher as copper rallied on the London Metal Exchange. Vedanta gained 4.6 per cent to 1,067 pence, Antofagasta increased 4.7 per cent to 832.5 pence and Anglo American advanced 2.1 per cent to 1,292 pence.

InterContinental increased 3.7 per cent to 1,874 pence after Deutsche Bank raised its recommendation for the hotelier to buy from hold, saying the stock’s underperformance compared with its peers including France’s Accor SA is “unjustified”.

EUROPE
Stocks rose, after their first weekly gain since May 17th, as euro-area factory output in June contracted less than estimated and Japanese manufacturers turned optimistic for the first time since September 2011.

National benchmark indexes advanced in all of the western European markets except Iceland. France’s CAC 40 added 0.8 per cent, while Germany’s DAX increased 0.3 per cent.

Nokia jumped 3.7 per cent to €2.95 after saying it will buy Siemens’ 50 per cent holding in Nokia Siemens Networks for €1.7 billion ($2.2 billion). Siemens gained 2.6 per cent to €79.63 after the companies agreed to end their six-year long joint venture.

NEW YORK
Stocks rose, rebounding from the first monthly loss since October, and metals led commodities higher as reports bolstered optimism in manufacturing from Japan to the US.

The S&P’s 500 Index climbed 0.9 per cent to 1,621.26 by lunchtime in New York, with trading volumes 15 per cent below the 30-day average. Onyx Pharmaceuticals surged 50 per cent after saying it is in contact with other possible bidders following its rejection of an unsolicited offer from Amgen.