Bid for lottery appears to have attracted three big hitters 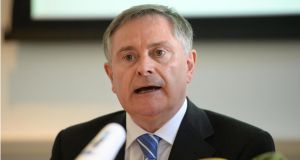 Minister for Public Expenditure and Reform Brendan Howlin has been clever, to link the sale of the lotto to the building of the children’s hospital, presenting it as an acceptable sacrifice at a time of fiscal constraint. Photograph: Dara Mac Dónaill

The Government’s decision to front-load lottery-generated money to the State by selling off an extended licence to a private operator was always going to have its detractors.

Ceding operational control of the business for a 20-year period represents an effective privatisation of what has been, to this point, a fairly successfully run outfit and a consistent revenue generator for the State.

Minister for Public Expenditure and Reform Brendan Howlin has been clever, however, to link the sale to the building of the children’s hospital, presenting it as an acceptable sacrifice at a time of fiscal constraint.

The merits of the sale can really only be evaluated when the price paid for the licence emerges, and later when the revenues for good causes flow in.

While good causes will receive, on paper at least, a smaller portion of the pie, Mr Howlin believes the new licence provides the next operator with an opportunity to grow the business, especially the digital side, which will result in more money for good causes.

Time will tell if he’s right.

With the deadline for bids closing yesterday, the process appears to have attracted at least three big hitters.

The current incumbent, An Post, will table a joint bid with UK operator Camelot. The semi-State and its new partner will face competition from Italian-owned Gtech, now the largest gaming business in the world, and – most likely – Australian gaming giant Tatts, who have been looking at Ireland as a door into Europe. Whether another bidder emerges from the undergrowth remains to be seen.

How the department and its adviser in Davy will assess each bid is a tightly guarded secret, but after the bidder’s financial footing and operational capability have been vouched for, it may simply come down to who bids the most.

A big question relates to what sort of stick the Government wields should the next operator fail to perform.

Based on precedence elsewhere, states have two choices in terms of governance.

They can opt for a small upfront sum or none at all and fine the operator for failing to hit clearly defined sales targets. This route appears to be favoured by US states. An obvious weakness here is that the operator can walk away from a poorly performing asset without incurring major losses.

The alternative approach, and the one favoured by Mr Howlin, involves eliciting a larger upfront payment, which serves as a discipline in itself by incentivising the operator to behave properly and grow the business to get a return on their investment, thereby growing revenue for good causes. The industry uses the phrase “an alignment of interests”.

Of course, the Government has to be sure it has leveraged enough money from the operator at the outset to ensure the model works as well as its proponents claim.

The new Lottery Act provides, for the first time, for a lottery regulator whose role will presumably be to keep the operator inside the confines of the licence, especially in terms of responsible gaming. Mr Howlin has hinted the regulator may eventually be tasked with overseeing the State’s entire gaming and gambling industry.

What the regulator’s role will be if faced with an under-performing operator is another unknown at this stage.

Another unresolved issue relates to the fate of the 107 existing National Lottery staff and what obligations the new operator would have towards them. There is also Rehab’s legal wrangle with the Government over lottery funding and its threat to challenge the National Lottery’s monopoly status.