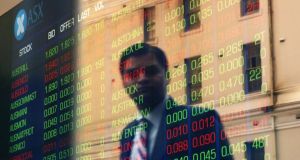 Stock picking: Investors often buy into a story, and forget to look for evidence to back up their assumptions.

Most of us are “predictably irrational”, to quote behavioural finance author Dan Ariely, relying all too often on a dodgy sense of intuition and an inflated sense of our own investment abilities.

The behavioural quiz contained in these pages last week may have alerted readers to their own mental quirks. Here are some more questions to test for any potentially costly cognitive cock-ups.


Quiz
1 – Linda is 31, single, outspoken and very bright. She majored in philosophy at college, where she was concerned by issues of discrimination and social justice, and also participated in anti-nuclear demonstrations.

Which is more probable?

A – Linda is a bank teller.

B – Linda is a bank teller and is active in the feminist movement.


2 – A health survey was conducted in a sample of adult men in Ireland.

(A) What percentage of those surveyed have had one or more heart attacks?

(B) What percentage of those surveyed are both over 55 and have had one or more heart attacks?


3 – A disease outbreak is likely to kill 600 people. You must choose between two policies:

A – 200 people will be saved if you choose programme A.


4 – You’re going to see a movie and have paid the €10 admission price, only to discover you’ve lost your ticket. Would you pay €10 for another ticket?

A second question. You’re about to buy a €10 cinema ticket. You then discover you lost a €10 note. Would you still pay €10 to buy the ticket?

It takes five machines five minutes to make five widgets. How long would it take 100 machines to make 100 widgets?

Because Linda fits the stereotype of a feminist, we are “led astray by our urge to create a story that in our gut seems to describe the evidence”, says investment manager Dr Wesley Gray.

We are blinded by the details of stories. The negative economic narrative meant that at the end of 2009, two-thirds of investors believed the S&P 500 had suffered a flat or negative year; it had risen 26 per cent. Half of investors thought 2010 was flat or down; the index had risen 15 per cent.

Similarly, commentators excitedly tell us markets will rise or fall due to what’s happening in the economy, even though studies show no link between GDP growth and stock returns. Investors buy into a story and forget to look for evidence to back up their underlying assumptions.

Framing
(3) – In a survey conducted by psychologist and Nobel economics winner Daniel Kahneman, 72 per cent of people choose Programme A, where 200 of 600 lives will be saved.

Kahneman then reframed the question. With Programme A, instead of saying 200 lives would be saved, it said 400 people would die. This time, just 22 per cent chose Programme A.

Similarly, another study found 93 per cent of PhD students registered early when told a late registration would result in a penalty fee. This fell to 67 per cent when it was presented as a discount for early registration.

Loss aversion is at work in both cases. That, and the importance of language – as Wesley Gray notes, investors are much more likely to invest in stocks if they are told $100 invested in 1927 grew to $371,452 in 2013, as opposed to saying equities returned 9.9 per cent annually.


Mental accounting
(4) and (5) – In a famous US survey, 46 per cent said they would pay to replace their lost $10 cinema ticket. However, 88 per cent would still pay for a cinema ticket if they lost a $10 note.

In theory, €10 is €10. In reality, we separate money into different accounts in our minds, a phenomenon known as mental accounting. Buying another ticket makes the movie – now costing €20 – seem too expensive; losing the €10 note, in contrast, is posted to a separate mental account.

The same process is evident with the calculator. In one case, we are prepared to drive 20 minutes to save €5; in the second, we are not.

Mental accounting can be costly. Many pay double-digit interest rates on car loans and credit-card debts while keeping money in a savings account returning 1 per cent. Using the savings to pay off debts is logical, but some prefer the psychological comfort of seeing the money in the bank.

Mental accounting also helps explain why it’s so difficult to find a taxi when it’s raining. Studies confirm taxi drivers clock off early on busy rainy days, once they reach their target level of earnings for the day. The rational approach would be to work longer hours on busy days, maximising hourly earnings. However, taxi drivers, like the rest of us, are prey to dodgy mental accounting.

More than half of Harvard, MIT and Princeton students surveyed got the bat-and-ball question wrong. In the original survey, of 3,428 people tested, only 17 per cent answered all three questions correctly. A third got all three wrong.

These are easy questions, but people take mental short cuts and accordingly trip themselves up.

People are overconfident, says Daniel Kahneman, and “prone to place too much faith in their intuitions. They apparently find cognitive effort at least mildly unpleasant and avoid it as much as possible”.

Ardently following “the law of least effort”, unfortunately, has obvious implications for both investment matters and decision making in general.

1 We are ‘sale agreed’, but can we go back with a lower offer?
2 Working from home: New costs, new stresses and little relief
3 Restaurants and gastropubs hope to avoid a dry reopening
4 McKillen companies get court order on size of basements
5 Ryanair to challenge Lufthansa’s €9bn aid
6 Eason to lay off 150 staff as it prepares for June reopening
7 HSBC board rethinks overhaul and seeks even deeper cuts
8 Hot-desking continues at bank call centres, workers say
9 Joint accounts: if one of us dies, can the other access the money?
10 New pre-booking app for customers a hit with retailers
Real news has value SUBSCRIBE
Save money on international transfers