Grappling with the maths on base cost of Fyffes shares 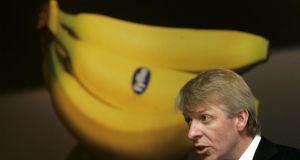 David McCann of Fyffes: calculating your capital gain when the shares you hold relate to a different corporate structure to the one in which you investedis not straightforward. Photographer: Dara Mac Dónaill/The Irish Times

I have some shares in Fyffes. I don’t understand what part Blackrock and Total Produce play in Fyffes. Can you please explain?

If I were to sell my shares in Fyffes, would Blackrock and Total Produce be involved and to what extent?

There’s nothing like the division of a listed company to give shareholders a headache. Having said that, I am a little surprised that the Fyffes deals have not come up before, given that the transactions happened in 2006. I would have thought that it would have have emerged as an issue for shareholders before now.

You basically need to work out if you have made a capital gain when you eventually sell your Fyffes shares.

Making that calculation when the shares you now hold relate to a very different corporate structure to the one in which you initially invested is not straightforward.

However, the good news is that the Revenue Commissioners, aware of the endless possibilities for confusion, tend to set down guidance on how to adjust the original share price to account for such splits and demergers – and that’s precisely what they have done here.

Starting at the top, where you initially bought shares in Fyffes, you now own shares in three separate companies: Fyffes, Blackrock International and Total Produce.

You don’t provide details on your shareholding or the price at which you bought it, but essentially, if you had 100 shares in Fyffes, you still have 100 shares in the company – although it is clearly a very different animal now. You also have 100 shares in each of Blackrock and Total Produce.

To sort out what the “base cost” of each now is, you will need to know what you originally paid for the shares. The base cost is Revenue’s assessment of what portion of each original Fyffes share is accounted for by the three new entities.

You will need to work this out in two stages.

First, you need to assess how the spin-off of the Blackrock International Land business affected the base cost of your Fyffes stock – and established a base cost for the “free” shares you got in Blackrock.

The Revenue determined that the market value of each company after the merger was Fyffes (€1.47 per share) and Blackrock International Land (€43 cent per share).

These figures allow you to determine how much of your original purchase cost is made up of the Fyffes shares.

If you sold the shares at that time, you would have subtracted €1.55 from each Fyffes sale price to work out your capital gain per share, and similarly with Blackrock.

But it doesn’t end there, of course, because Fyffes subsequently spun off Total Produce.

After the Total Produce deal, Revenue determined the market price of the shares as 96 cent (Fyffes) and 79 cent (Total Produce).

Remember that, following the Blackrock deal, Revenue is assuming your Fyffes shares have a base cost of €1.55 (assuming you paid €2 for them in the first place).

Again, it might be easier to use percentages so that you can work it out on the basis of the price you actually paid for Fyffes originally. Remember that before the Fyffes/Total Produce deal, the Fyffes shares were worth just 77 per cent of their original purchase price.

The equivalent figure for Total Produce is 34.65 per cent.

When you have worked that out, you will subtract that figure from the sale price per share when you sell your Fyffes shares to work out your capital gain.

Also, as I mentioned, you now have shares in Total Produce and Blackrock. When you sell those, you follow the same procedure to calculate your capital gain on those transactions.

Remember, you are entitled to make a capital gain of up to €1,270 in any year before facing a bill for capital gains tax.

Finally if, having worked out the figures, you are actually making a loss on any share sale, you can offset it against future profitable sales in the same year and if it is not fully offset in that year, you can carry the loss forward.

Good luck with the maths. If you send me in the purchase price, I’ll crunch the numbers for you.

1 How to gift your child a house deposit . . . tax free
2 BOI customers to be charged twice with bank fees on New Year’s Eve
3 Family in court dispute over hotels in Dublin and Galway
4 Stripe in talks for new funding at much higher valuation
5 Irish start-up which developed facial recognition for cows raising over $50m
6 Ryanair warns it may reduce more Irish services and relocate operations
7 Irish designer of Oxford vaccine: ‘I’ve never worked so hard in my life’
8 Workers have little idea of the cost of retirement income
9 Greencore business ‘absolutely smashed’ by Covid-19, says CEO
10 Willie Walsh appointed head of the International Air Transport Association
Real news has value SUBSCRIBE
Save money on international transfers