Fiona Reddan: Affordable housing? You’ve got to be kidding 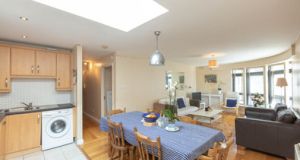 A three-bed at Norseman Court in Stoneybatter is on the market for €395,000 – less than so-called “affordable” homes in the area.

There’s an old adage we’re all familiar with: “Well, I wouldn’t start from here if I was going there.” And the more we learn about the Government’s “affordable” housing strategy, the more it calls to mind this phrase.

In the midst of a fully-fledged housing crisis, with rents continuing to hit new highs, and house prices recovering strongly until the latest abatement, there is clearly an urgent need for affordable housing in Dublin.

The Government has swathes of local authority land – in places like Dublin’s Glass Bottle site in Ringsend – ready for development into “affordable” homes, which are targeted, according to Minister for Housing Eoghan Murphy, “towards low- to middle-income first-time buyer households”.

But have they started off in the wrong place for where they want to end up?

In the latest move in the Government’s affordable housing strategy, last week Dublin City Council revealed it had appointed Bartra Capital as its preferred bidder for a development of the O’Devaney Gardens site. The site in the north inner city, formerly home to 272 flats across 13 four-storey blocks, is now to be redeveloped into a mix of 824 private, social and affordable homes.

Indeed, 165 of the units will be deemed “affordable”, marking one of the first concrete examples of the Government’s Rebuilding Ireland affordable housing strategy since it was launched with much aplomb back in 2015.

But how “affordable” are these homes?

Already there have been objections against these values. To purchase the cheapest one-bed apartment for example, our putative buyer will need savings of €23,700, plus an income of €60,942 based on a mortgage multiple of 3.5 times income. But is someone on that level of earnings really a “low-income” buyer? And what about the more expensive properties? To buy a two-bed house for €315,000, our buyers would need income of €81,000, or €108,000 for the most expensive three-bed.

Not only that, but if our would-be buyer is single, then they could find themselves excluded from the scheme, even if they had earnings of more than €60,000, as the mooted eligible income limit is €50,000 (this already applies to Rebuilding Ireland Home Loans). But a couple earning €75,000 (limit for couples) might also be excluded because of the priority rules which govern who gets an affordable home. According to this, a one-bed home is best suited to a “single- or two-person household”. So what happens if our couple earning €60,000 have a child?

But that’s not all “affordable” purchasers will have to contend with. They will also, at some point, have to repay the “discount” from which they have benefited.

Under the old affordable scheme, for example, which came to an end in 2011, property purchases – offered at discounts of 25-35 per cent of “market value” – were subject to a claw-back of the discount on the price, if the units were sold within 20 years (reducing by 1/10th for years 10-20). The thinking, presumably, was that in a rising market, affordable buyers shouldn’t profit from their purchases, and instead should pass on the gains they had made to the council. Of course this didn’t quite happen, as many of these buyers found themselves in negative equity as a result of the crash, which forced councils to change their criteria. A claw-back now only applies when a buyer is making a profit on the sale of their property.

But despite these recent experiences, the Government is still ploughing ahead once more with this concept, albeit with a slight change of tack. This time around, local authorities will hold on to an equity share of each affordable property sold, which would allow the “recovery of market value discount”.

Options for paying down the council’s stake – as well as their own mortgage remember – include paying instalments “off the charge” over the life of the loan, or when the property is resold.

When the council gets this charge repaid, it will then put these funds into a new Affordable Dwellings Fund, to build more affordable homes.

But what if the “market value” of these homes falls? After all, latest figures show prices in the capital are starting to waver again.

Now all of the above may be palatable if buyers were sure they were getting a good deal in the first place.

But one of the problems (and there are several) with this equity share goes back to “market value” and the discount applied to this.

When asked how it determined the market value upon which the mooted sale prices at O’Devaney Gardens are based, Dublin City Council offered us no response.

And a cursory glance on property platforms would query the logic of their “market value”.

In the case of the priciest three-bed property for example, a 40 per cent discount would infer a market value of €700,000 – or €600,000 for a 30 per cent discount. But we found a three-bed apartment at Norseman Court in the area already on the market for just €395,000 – or a value that’s even less than the so-called “affordable” price.

What the market value might be referring to then is build-to-rent values, which tend to be substantially higher than sales to owner-occupiers – and is a market which developer Bartra Capital is involved in.

So is the Government heading in the right direction? Well, if it had really been determined to deliver housing at a more reasonable cost, wouldn’t a simpler approach have been to forget about discounts and market values and just offer the homes as cheaply as they can be built?

1 In this strangest of recessions, what happens next for Ireland?
2 Michael O’Leary is the boss you want to lead an airline out of crisis
3 Ireland’s Covid-19 economy in five graphs
4 Fortnite owner signs multimillion deal to buy Irish ‘kidtech’ firm
5 Bank of Ireland sees about 2,000 staff apply for voluntary redundancy
6 Take a look inside Adare Manor before it closes until 2017
7 Brand new world: How advertisers must adapt their message in the age of Covid-19
8 Irish whiskey sales near milestone of 12m cases a year
9 French investor acquires Cherrywood office investment for €27.7m
10 Overhaul of lease arbitration regime would be a game changer for retailers
Real news has value SUBSCRIBE
Save money on international transfers