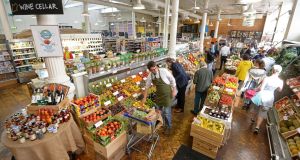 Fallon & Byrne is reviewing a plan to open a flagship food hall, delicatessen and restaurant at the Dundrum Town Centre, writes Ronald Quinlan, though centre owner Hammerson still expects to seal the deal.

Belgian bank KBC has softened its stance on not selling off non-performing owner-occupier home loans as net profit slumped over 80 per cent last year to €32.3 million. Joe Brennan reports that the bank is facing pressure from regulators over stubbornly high levels of impaired loans.

Women in financial services in Ireland earn an average of ¤25,000 less than men, data from the Central Statistics Office (CSO) shows, with Peter Hamilton writing that the gap exists in all sectors of the business.

Failure to get an injunction forcing Leisureplex out of the Stillorgan Bowl will cost developer Kennedy Wilson “millions and millions” of euro in losses on its plan to redevelop the site, a court heard yesterday.

Peter Hamilton reports that Ireland’s Financial Services and Pensions Ombudsman upheld more than 200 complaints against banks and insurers last year, including one where a couple was awarded compensation of €35,000. However, the ombudsman has delayed a report on 25 tracker mortgage cases until next month.

Irish entrepreneur Kevin Glynn appears to have raised another ¤20 million from backers for his London-based fresh dog food business Butternut Box less than a year after securing funding of €177.8 million, writes Charlie Taylor.

Mixed views on the economy in two reports, with the European Commission noting a “marked rebound” in Irish consumer and business confidence as the threat of a no-deal Brexit receded. The OECD, meanwhile, warned of a pensions timebomb if we stop working too early and also urged the Government to put all “windfall” corporation tax payments against our national debt or into the rainy day fund. Patrick Smyth and Barry O’Halloran have the details.

Direct provision has become an increasingly controversial policy in recent years but it has paid off for the Duggan family behind Millstreet Equestrian Services. The business which houses up to 855 asylum seekers saw revenues more than double to €8.6 million. That was enough, writes Gordon Deegan, to turn a €161,000 loss the previous year into a €2.36 million profit.

In Agenda, Cliff Taylor asks what Sinn Féin’s election success means for business with investors are jittery over possible changes to tax and policy if the party does end up in government.

However, in Caveat, Mark Paul suggests that if Sinn Féin does end up calling the policy tune in Merrion Street, business will still dance to stay at the ball.

And, in his column, John FitzGerald warns any incoming government that cutting taxes on income or property would damage ability to redistribute wealth in the economy.