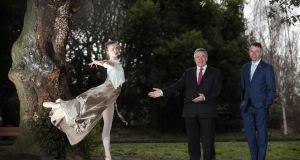 Andrew Hetherington, chief executive of Business to Arts, with Sean McGrath, CEO of Allianz Ireland, and ballet dancer Kerrie Patten from the Metropolitan School of Dance, at the launch of the 2018 Allianz Business to Arts Awards

Advisory group Business to Arts has opened nominations for its annual awards which “celebrate the unique opportunities that business engagement with the arts provides”.

Previous winners at the awards, which are sponsored by Allianz, include Accenture, ESB, Bord Gáis Energy, Dublin Port Company and Bank of Ireland.

There are 10 categories in total, focusing on sponsorship, commissioning, CSR initiatives and community engagement as well as mentoring, training and staff programmes.

Business to Arts has also published research which shows 55 per cent of businesses that sponsor the arts increased their spend last year compared with 2016.

However, just 4 per cent said they would increase it again next year, while four in 10 said they will reduce it.

Almost three-quarters of businesses would choose arts sponsorship to engage its customers while seven out of 10 would choose to support the arts to engage their staff.

Some 72 per cent of those businesses involved in arts sponsorships say it helps change or reinforce their organisation’s brand image.