Cantillon: With vaccine scepticism rising, the key challenge is whether people can be convinced to get inoculated 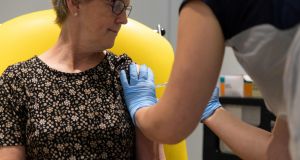 If the clinical trial numbers are near what is replicated in the field, it will help to overcome some resistance to the vaccine. Photograph: John Cairns/University of Oxford/AFP via Getty Images

After a year when it regularly seemed as though things were destined only to get worse, we have had a run of remarkably positive news on the Covid-19 front with, not one, but three western vaccines now promising efficacy of 90 per cent or more.

With Oxford University and AstraZeneca making the third such announcement in as many weeks, it might be tempting to become blasé about the figures and to underestimate the massive achievement it has been to get three vaccines to the door of the regulator from a standing start inside of a year.

It’s easy to forget that the FDA was prepared to green light a safe Covid vaccine as long as it was effective in 50 per cent of cases.

So the figures coming from clinical trials run by Pfizer/BioNTech, Moderna and Oxford/AstaZeneca are astonishing. But getting the vaccines approved is just the start of another challenge – getting people inoculated.

Vaccine scepticism is rising, even in Ireland, which has traditionally been at the upper end of vaccine take-up figures worldwide. A campaign against the HPV vaccine Gardasil saw uptake drop from 90 per cent to below 50 per cent at one point, Ger Brennan, country manager at its maker MSD said some time ago. It took an extensive campaign of education to bring it back to more than 70 per cent.

The effectiveness of a vaccine is determined by a number of things – the infectiousness of the disease – that vaunted R number – the efficacy of the vaccine and how many people take it.

Researchers are still debating the basic reproduction number for this coronavirus but, depending on whom you talk to, it appears to range from 2.2 to 4.5.

If the clinical trial numbers are even close to what is replicated in the field, it will help to overcome some resistance to the vaccine. But you could still be looking at getting close to three-quarters of the population vaccinated.

We are likely to have the supply. The key challenge is whether governments here and elsewhere can achieve the take-up.