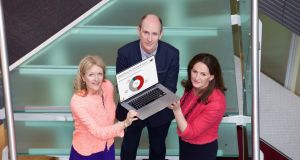 Digital advertising revenues in the Irish market rose 10 per cent to €491 million last year, according to figures from industry body IAB Ireland and accountancy giant PwC.

While this rate of growth in the online ad market was slower than in previous years, the performance still sets the fortunes of digital media on a distinctly separate track to those of traditional media, which saw their ad revenues fall last year.

The IAB Ireland/PwC online adspend study for 2017 found that €264 million was spent on mobile advertising, up 14 per cent, while desktop advertising spend was estimated at €227 million, up 6 per cent.

Mobile adspend first overtook desktop in 2016 and it continues to outstrip it, now accounting for 54 per cent of digital advertising. Heavy usage of phones is driving the trend, with IAB research suggesting 59 per cent of consumers in Ireland use their mobile device at least once every 30 minutes.

The online ad market is now more than five times the size it was in 2009, having accelerated sharply in recent years, when most of the gains can be attributed to surging revenues for Facebook and market leader Google.

IAB Ireland chief executive Suzanne McElligott said the 2017 growth was “a very positive performance in a challenging year for the Irish and global advertising market”, while new chairman Shane Nolan said the figures reflected “a strong and mature advertising medium”.

Paid-for search advertising, which is dominated by Google, grew 12 per cent in 2017 and remains the dominant format with estimated spend of €245 million, or half the digital market. The fastest rate of growth was in digital video advertising, which expanded 46 per cent to reach spending of €68 million.

IAB’s figures are derived from figures provided by 27 online publishers as well as estimates of the Irish advertising revenues for platforms such as Google, Facebook, Twitter and LinkedIn.

Further digital growth is expected. Core Media forecasts that online advertising will account for more than half the total advertising market in 2018, as traditional media revenues decline again.

McEvaddy brothers vow to continue to back Irish aviation business 04:02
Commercial vacancy rates increased in all provinces last year 04:00
Solar panels: How do they work - and are they worth it? 03:45
US stocks have worst day in two years as coronavirus fears spread 21:22
Some €436bn wiped off European stocks as coronavirus fears increase 20:40
Search executive
jobs on irishtimes.com