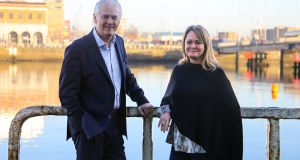 Strategem, a 20-year-old agency with a base in Irishtown in Dublin, will be rebranded Connelly Partners (Dublin) and will serve as a European hub for the New England agency. Some 65 new positions will be added over the next three years, it said.

Strategem founder Keith Lee will continue to head up the agency, while Courtney Doyle of Connelly Partner’s Boston office has been appointed managing partner and will split her time between both locations.

“Our approach to advertising has always been about human behaviour and what makes people buy into modern brands. Having vast amounts of data is useless unless you understand the humanity, what makes people tick and why they make the decisions they make,” he said.

The acquisition follows a relationship between the two firms, which have worked together on past projects.

Connelly Partners said having dual European and US locations would help Irish clients that were keen to expand into the US, as well as American clients interested in Europe. Ms Doyle described the Dublin office as “a technology hub and launch pad into the UK and wider European markets”.

Connelly Partners, founded 18 years ago, employs 150 people in Boston and has a turnover of circa $61 million (€50 million), with clients including American Express Travel, Samsonite and the Massachusetts State Lottery.

US court allows shareholders to sue Ryanair over claims during dispute 21:21
Government to form task force to rescue aviation sector 21:21
Snapchat to no longer promote Trump’s account due to inflammatory comments 20:16
Donohoe warns of cost of pandemic as budget deficit swells to €6.1 billion in May 18:37
European shares extend rally as insurance and travel stocks soar 18:16
Search executive
jobs on irishtimes.com