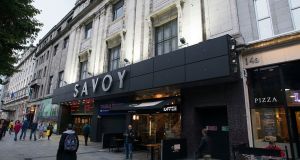 Profit at Irish Multiplex Cinemas (IMC) Limited fell 9 per cent to €1.16 million in a year that saw films including Spiderman: Homecoming, The Greatest Showman and Star Wars: The Last Jedi released.

The administrative arm behind 21 cinemas across the island of Ireland said accumulated profits exceeded €10 million in the year to the end of October 2017.

The group which controls cinemas such as the Savoy in Dublin employed 45 in the period, with wage and salary costs totalling €865,809.

IMC also has a series of related companies that posted mixed results in the period. Dublin Cinema Group Limited recorded a €78,008 loss, while City Cinemas Limited had a profit of €236,307, although this was down more than 45 per cent on the previous year.

Other associated companies include a cinema IT services company and another management company.

IMC is controlled by the Ward family which before a dispute toward the beginning of this decade controlled about half of the Irish cinema market with the Anderson family.

The dispute, described as being “extraordinarily bitter” in the High Court, saw the Wards gain ownership of the Savoy, while the Andersons took control of the Cork Omniplex.

Shareholders of IMC limited, which has its registered address at Dún Laoghaire, include Paul Ward (69), who holds 37 per cent individually and an additional 13 per cent through a trust and related company.

His family hold shareholdings in other group companies.