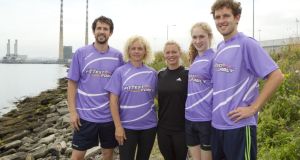 The O’Reilly family, winners of Animo Television’s ‘Ireland’s Fittest Family’, are pictured with mentor Nikki Symmons (centre). RTÉ One has appointed Animo’s Adrian Lynch as controller of RTÉ One.

RTÉ has appointed Adrian Lynch from independent production company Animo Television as the controller of RTÉ One.

Mr Lynch will step down from his position as managing director of Animo, the producer of shows including Secret Millionaire, Ireland’s Fittest Family and Celebrity Bainisteoir, in November in order to take up the role.

He succeeds George Dixon, the British television executive who left the role after less than a year in order to become global editorial director of BBC Worldwide.

Mr Lynch said he looked forward to working with Irish programme-makers and talent, both inside and outside of RTÉ. “I believe in the importance of well told stories in drama and documentary, as well as the national pulling power of live event television,” he said in a statement.

Other programmes made by Animo for RTÉ include Feargal Quinn’s Retail Therapy, OMG! It’s Jedward! and current affairs documentaries such as Freefall: The Night the Banks Failed and Futureshock: Property Crash.

RTÉ Television managing director Glen Killane, who created two channel controller positions in early 2013 in a bid to shore up RTÉ One and RTÉ Two’s connection with audiences, said Mr Lynch had “all the experience and attributes to be an outstanding creative leader” for RTÉ One.

“Through his experience with Animo Television, Adrian has proven that he has excellent programming and public service instincts as well as an innate entrepreneurial spirit,” Mr Killane said.

A number of internal RTÉ candidates were understood to have applied for the position.

RTÉ One has a 20 per cent share of viewing to linear television channels in Ireland and reaches an audience of 1.85 million on an average day, the TAM Ireland figures compiled by Nielsen show. The channel broadcast 19 of the top 20 programmes in Ireland last year.

1 Nine more suing INM and Leslie Buckley over alleged data hacking
2 Columbia Sportswear defies gloom with first Irish standalone shop
3 Restaurants file court actions against insurers over lockdown losses
4 ‘The rental situation stops me moving back home’
5 VAT cuts are for businesses – consumers will still pay the same
6 High Court appoints interim examiner to Compu b parent company
7 How much do Irish people earn? And what will Covid-19 do to our wages?
8 Second Covid-19 outbreak and no-deal Brexit an appalling vista
9 Could your old car be giving away all your secrets to its new owner?
10 Why are markets booming when a crash is on the way?
Real news has value SUBSCRIBE