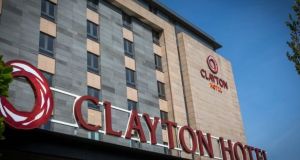 Dalata, which owns the Maldron and Clayton hotels, closed up 7 per cent on Friday.

Kerry Group clawed back losses, ending 0.4 per cent higher at €108.4 after sliding by as much as 11.5 per cent in trade on Thursday after a short seller’ questioned its M&A record.

Ryanair gained 2 per cent to €15.32 after airlines rebounded after losing ground earlier in the day. Positive news from American Airlines helped lift the sector as a whole.

There was decent volume in Kingspan, which has numbers out on Friday next. It closed down 0.5 per cent at €53.25. Investors were also focused on Glenveagh, which ended 0.8 per cent higher at €0.85.

Dalata was up 7 per cent to €3.61 after news emerged that a European corporate had decided not to proceed with the purchase of up to 14 per cent of the group.

London’s FTSE 100 rose on Friday, clocking a second straight weekly rise, led by gains in healthcare stocks as investors remained optimistic of a vaccine-led economic recovery even as data showed the British economy shrank by a record 9.9 per cent last year.

The blue-chip FTSE 100 index rose 0.9 per cent, with healthcare and financial stocks, mainly AstraZeneca GlaxoSmithKline and Prudential leading gains. Oil heavyweights BP and Royal Dutch Shell were also among the biggest gainers on the index as oil prices edged higher. The mid-cap index rose 0.1 per cent.

Fuel retailer Vivo Energy rose 5.8 per cent after forecasting full-year core earnings above the top end of a market estimate and announced a dividend for 2020. Holiday company Jet2 fell 7.2 per cent as it raised £422 million through a new share issue, equivalent to 20 per cent of its share capital prior to the fund raising.

The pan-European STOXX 600 index closed up 0.6 per cent at a three-week high for a second straight week of gains. ASML rose 3 per cent after the Dutch equipment maker said the chip shortages slowing car production were a symptom of a broader increase in demand.

Wall Street’s main indexes eased on Friday ahead of a long weekend, as investors digested recent gains driven by stimulus bets and accelerated vaccine roll outs. Heavyweights Apple, Tesla and Amazon were among the major drags on the S&P 500 and the Nasdaq.

Walt Disney reported a surprise quarterly profit. However, its shares fell 1.5 per cent. after a more than 13 per cent run up to its results over the last two weeks.

PayPal rose about 3 per cent as several brokerages raised price targets on the stock a day after the payments company’s investor day call.

Dating app operator Bumble gained 13 per cent, a day after a stellar debut sent its shares up more than 75 per cent.