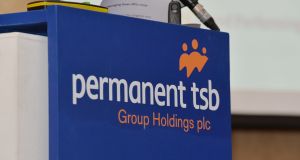 Permanent TSB rose 9.37 per cent on the back of the sale of its project Glas non-performing loan portfolio. Photograph: Alan Betson

European shares climbed on Tuesday to a new six-week high on signs the US and China would avert a trade war, while strong earnings updates drove gains for stocks on the continent including Germany’s Lufthansa and France’s Vivendi.

Ireland didn’t benefit quite as much on the day, although there were some bright spots, with Permanent TSB rising and property stocks up on the back of substantial volume trades.

Britain’s FTSE also recovered somewhat, with oil major BP performing well while, in the US, industrials led a rally, again fused by hopes a trade war would be averted. Additionally, tech stocks pulled back after a few days of losses.

A busy day on the Irish stock exchange saw Dublin’s benchmark index inch higher by a meagre 0.09 per cent, with big movements in property names and banks.

Permanent TSB moved 9.37 per cent higher to €2.10 on the day, buoyed by the sale of its Project Glas non-performing loan (NPL) portfolio for €1.3 billion. Ireland’s third-largest bank now effectively reduces its NPL ratio to 16 per cent, down from 25 per cent. Bank of Ireland, meanwhile, reversed losses, advancing 1.94 per cent to €7.345, while AIB was flat on the day.

Glenveagh Properties, which announced it had paid €65 million for a 113-hectare site in Dublin, increased 0.36 per cent to €1.12 on the day on strong volume. Other homebuilders including Cairn Homes increased while Ires Reit declined on the day by 2.28 per cent to €1.374 with unusually high volume.

Other high-volume losers on the day included Glanbia, which dropped 2.43 per cent to €14.07, and Total Produce, which fell 3.73 per cent to €2.195 having received regulatory approval for its Dole Foods deal.

The FTSE 100 closed up 0.6 per cent on the day, helped by better-than-expected profit growth at oil major BP.

Elsewhere, some results disappointed. Centrica fell 2.6 per cent to the bottom of the FTSE, amid worries over weaker performance in its consumer business.

Just Eat was a top faller, down 6.3 per cent, as worries over a build-up in costs at the British takeaway firm overshadowed an upgrade to full-year revenues.

Greggs reassured investors by reiterating its full-year profit forecast, sending the shares in the British baker 9.6 per cent higher.

Shares in French media conglomerate Vivendi gained 4 per cent after it reported results and said it was considering selling up to half of its Universal music division.

Top of the STOXX was Italian aerospace and defence firm Leonardo, which surged 10.6 per cent after upping its 2018 revenue and free cashflow outlook, saying its helicopter unit was recovering.

Among the biggest fallers, British building materials supplier Travis Perkins tumbled more than 10 per cent and was one of the worst STOXX 600 performers after it cut its profit outlook due to a weak DIY market.

The industrials sector jumped 1.74 per cent and was on pace for its best one-day gain in three weeks.

Boeing, Caterpillar and 3M jumped between 1.7 per cent and 2.5 per cent.

After a three-day slide, the technology sector rose 0.39 per cent. Microsoft gained 0.7 per cent and was the biggest boost to the S&P and the Nasdaq. Apple, due to report after the bell, was marginally lower.

1 Irish people like nothing more than being bribed with their own money
2 Being in Nama regarded as stigma in UK, O’Flynn tells court
3 Climate apathy in Northern Ireland could impact on the Republic
4 Hogan warns Britain on US trade deal as EU set to impose tariffs
5 Construction body calls for loan scheme to help first-time buyers
6 The Irish economy is thriving but if you’re not feeling it – here’s why
7 Greencore investors urged to spurn Coveney’s €315,000 pension
8 Barclays to cut 100 senior roles as lender seeks to rein in costs
9 EU considers five-year ban on facial recognition tech in public areas
10 Fast-growing frozen food group has a strong appetite for success
Real news has value SUBSCRIBE