Packing company wrapped up in online, design and sustainability 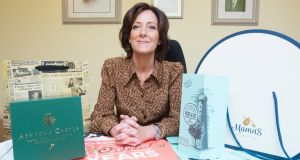 Before Vicki O’Toole made the plunge into business, her life moved at an altogether more leisurely pace. A regular on the golf course for a 9.20am tee time, O’Toole was a stay at home mother with five children to look after.

Fast forward 18 years from the birth of her fifth, and last, child and O’Toole is at the helm of a 105-year-old Limerick business – JJ O’Toole Ltd – which designs and supplies packaging to a plethora of sectors including retail, hospitality and drinks.

Her work now puts her in charge of a team of 25 at a business which, in its last financial year, posted sales of just under €9 million.

That figure, for O’Toole, is a “little black mark” – she was aiming for €10 million in sales, having consistently grown the company over the past few years.

“It’s down to a few things,” she says, citing Brexit and a slight nervousness in the Republic’s retail sector. One retail customer, for example, has been drawing down their packaging at a roughly 20 per cent slower rate to the same period last year.

This prompted O’Toole’s to expand to as many sectors as possible from businesses as big as department stores down to undertakers and greengrocers.

And while she’s disappointed that the €10 million target wasn’t hit, she’s not fazed, instead shifting focus to improving the offering for those companies that use the internet to sell their goods, “particularly a product that’s being shipped over to America. The retailer wants their brand experience to land at the front door, not DHL or whoever it is.”

That change in buying patterns has provided opportunity to the company, which has recently been involved in creating packaging for a florist selling their wares online.

Beyond its new clients, there are few big names in Irish business not serviced by O’Toole’s business. Considering her late entry into the world of business, those recent successes are all the more impressive.

Born in 1964, O’Toole does come from a business family. Her mother, German-born Ingrid, was an “amazing woman” who did everything from cleaning the house to plaiting her children’s ponies before shows and writing children’s books, “not to make money” but just to be busy. Her father Hugh was the chief executive of McMahon’s, a well known builders provider business in Limerick that at one point in the early 1900s was the largest timber supplier in the State.

Her brother, Mark, is now the chief executive of McMahon’s. When she left secondary school, O’Toole set about obtaining a law degree at University College Cork but dropped out soon after. That, she says, is her big regret – two of her children have since completed law degrees. Her parents then sent her to Paris to be an au pair. She stayed nine months before returning to sit The Irish Times secretarial course.

The plan then was to go into banking with AIB but, before she had the chance to do that, she met Fergus O’Toole. Nine months later, they married.

“He had his job [as the boss of JJ O’Toole Ltd], he had his house, there was no point in waiting,” she says of the whirlwind romance. “Daddy called us out to the house one day and he started flicking through his racing calendar and said, ‘I’m not doing anything on August 31st’, meaning that would be a good day to get married.”

And they did. Five months later, O’Toole was pregnant with her first child, Chloë.

O’Toole worked in the home, looking after what was then a growing family. “We were living the dream. We had a beautiful house, five healthy children, [I was] playing golf on a Tuesday, my handicap down to 12.”

Her husband’s family business, meanwhile, was thriving up until 2002, when the Republic introduced the plastic bag levy. In the run-up to that, things drastically changed for the business.

“They knew the tax was coming but nobody knew the impact it would have,” O’Toole reflects. Ultimately, it led to the closure of the company’s Dublin branch and put a serious dent in the business’s finances, which moved from a €745,000 profit to a €636,000 loss in the space of a year.

Soon after that, Fergus got sick “out of the blue”. “I just thought it was going to be one of those things camomile tea [would fix]; the naivety was extraordinary,” she says, speaking candidly about her husband’s struggle with depression at that time.

“Cancer is horrific but you can talk to somebody about cancer but, with depression, you can fake it unbelievably [and] unless you’re losing a load of weight, nobody can read it.”

Around 2002, after the plastic bag tax was introduced, the company’s accountant and O’Toole’s brother Mark visited her and, in a conversation in her living room, suggested that the couple sell the business. “The company was haemorrhaging money and Fergus had lost his nerve and hated coming in the door. They decided it made better sense and Fergus’s health was much more important than any business.”

After three sleepless nights worrying about the family losing the JJ O’Toole name, Vicki herself began working in the company, “for moral support, initially”.

Having started part-time, sourcing new suppliers, after about five years O’Toole and her husband “did a reversal” and he stayed at home while she ran the company. That, too, was difficult. “A lot of people who had been working here with Fergus and his dad...wondering what I was doing here.”

O’Toole had to run both the household and the business after her husband died in 2010. Some tough years followed with rising rents for the company’s warehouse and office building on the outskirts of Limerick coinciding with a business contraction as the global financial meltdown hit home.

O’Toole fought on, ultimately buying back the company’s office and warehouse building from its then owners. Work ramped up significantly during those recession years. Sometimes she was in the office six days a week. “When Fergus died, it was to forget,” she says. Now, she chooses not to switch off because of her love for the business.

“I really do love the company and I have this fear of failure. Not for me, for my clients and my colleagues. Nobody’s ever been let go here for financial reasons when I’ve been here,” she says, and you can tell how proud she is of that achievement.

During her tenure, the business has transformed itself from a supplier to a company offering a more complete service, including design. Where once it specialised in selling plastic packaging, it has now returned to its roots and added the design dimension, employing three graphic designers to cater for its clients, who include Selfridges, Harrods, Brown Thomas, Adare Manor, Ashford Castle and Diageo.

“I don’t think there is a packaging company in Ireland that has a creative department like ours,” she says.

The move away from plastic and into recyclable materials is inspired by her mother’s actions. “I still remember going to the local shop and she’d make me go in with all the plastic bags she’d kept so they could reuse them.” On other occasions, when at boarding school, O’Toole recalls getting letters from her mother that had been addressed to her father with his name crossed out. “All of her envelopes were recycled,” she says.

As consumers and companies become increasingly conscious of their green credentials, O’Toole’s business has to respond rapidly to trends. She is “determined that, in five years’ time, we’ll have absolutely no plastic”.

What else may change over those five years is unclear but it seems a certainty that O’Toole will be in the company for a long time yet. “I think I’m going to keep doing it as long as I enjoy it,” she says as we discuss a recent flirtation with a succession plan. Her first son JJ, who now works in aviation leasing, was going to be the fourth generation in the company and started a trial run.

“We had a honeymoon period of nine months and we both could see this wasn’t going to be his thing...he just didn’t feel it. He’s much happier in the industry that he’s in,” she says.

With succession put to one side and most of her family having moved out of home, O’Toole, who was a finalist in the 2018 EY Entrepreneur of the Year competition, is free to invest even more time in business.

But what about downtime? “I garden, so that’s my hobby. I’m not going to take up hand gliding or anything like that,” she says.

Watching the news is also currently a source of enjoyment. “I love watching the news. It’s like the muppet show,” she says, in reference to the ever changing Brexit debacle, which she describes as “discombobulating”.

She never expected to be running a business when she had her first child, she admits. But recalling a conversation with a friend, it quickly becomes clear that, as rewarding as raising a family is, for O’Toole, it wasn’t going be the be all and end all. In that conversation, she said she “didn’t want to be buried [with an epitaph] saying ‘she was a great wife and a great mother’, it just wasn’t enough for me”.

Will she ever get back to golf? “I don’t know where my golf clubs are...but I would like to sneak out to the driving range to see if I still have it”.

Interests: Gardening and, at one time, golf.

Something you might expect: O’Toole says she can tell the weight of packaging paper just by feeling it.

Something that might surprise: Despite her business success, it is the law degree that she never finished which is O’Toole’s big regret.

7 How to improve ethics at your company