Hyundai in talks with Apple over electric car collaboration 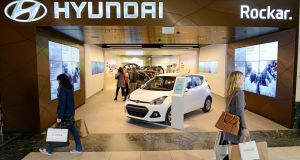 Hyundai regularly ranks as the world’s fifth-biggest carmaker by sales.

Shares in Hyundai surged after the carmaker confirmed early stage discussions with Apple about building an electric vehicle in what could mark the US tech group’s eagerly-awaited move into the industry.

“Apple and Hyundai are in discussions, but as it is at an early stage, nothing has been decided,” South Korea’s Hyundai said in a statement to the Financial Times on Friday.

However, the carmaker played down its certainty of the potential partnership, adding that Apple was speaking with “a variety of global carmakers”. The US tech group declined to comment.

A Korean-language report, published on a news service part-owned by Hyundai, said that Apple plans to launch its electric vehicle in 2027 and is teaming up with Hyundai to develop the car and its own EV batteries. Hyundai declined to comment further.

Hyundai’s shares were up about 20 per cent and trading at a six-year high in late-morning market activity in Seoul on Friday.

While Apple executives have said little publicly, the company’s efforts - including in-house engineering, testing and acquisitions - go back at least seven years.

Apple’s ambitions are viewed as a threat to industry leader Tesla as well as traditional carmakers such as Ford, Volkswagen, Toyota and GM. The latter are trying to navigate the upheaval as the industry transitions to driverless and more environmentally-friendly vehicles.

The success of Tesla founder Elon Musk in building the world’s most valuable auto group underscores the threat Apple could pose if its cash, engineering talent and global brand recognition is channelled towards EV development.

Reports on Apple’s imminent entrance marked “one of the biggest ‘moments’ in the autos and shared mobility industry in 2020”, Morgan Stanley analysts said last month.

“We’re not just talking about any ‘new entrant’ looking at autos. This is Apple. Aside from Apple’s technical knowhow and platform advantages, the company has nearly $200 billion of cash and is expected to generate more than $70 billion of annual free cash flow going forward,” the analysts said.

Volkswagen chief executive Herbert Diess said in 2019 that by 2030 the biggest auto companies may well be Tesla and Apple. “I hope that it will still be Volkswagen; we are working hard. But on the other hand I am quite sure that not all brands can survive this.”

Hyundai, which regularly ranks as the world’s fifth-biggest carmaker by sales, has embarked on a spree of investments and partnerships in new auto technologies. Those include its 2019 $4 billion joint venture with Dublin-based auto tech group Aptiv and scores of smaller plays.

Chung Sung-yop, an analyst at Daiwa, said the tie-up could benefit from Hyundai’s openness to working with other companies in its EV and hydrogen technology development.

“Japanese automakers are not so open to external collaboration and Apple is unlikely to choose a domestic [US] automaker as a partner,” Mr Chung said.

Kim Jin-woo, an analyst at Korea Investment & Securities in Seoul, said investors in the country were going “crazy about just the fact that Hyundai was in talks with Apple”.

“Apple considering Hyundai as a partner shows how the carmaker’s EV credentials have improved, even if the talks break down,” he said.