Irish corporate tax take under pressure from EU and Trump 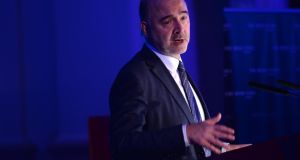 Pierre Moscovici, EU Commissioner for Economic and Financial Affairs, Taxation and Customs: “While Ireland has not always played fair in the past it has done impressive work to tackle tax avoidance and support the agenda for fairer taxation.” Photograph: Dara Mac Dónaill

The Republic’s corporate tax take faces threats from Donald Trump to the west and Pierre Moscovici to the east, with the latter in Dublin this week on a charm offensive as business leaders came together to thrash out the finer points of the State’s tax practices.

Moscovici, the European Union’s economic affairs and taxation commissioner, was at the Westin Hotel to address The Irish Times Corporate Tax Summit before making the short journey up Kildare Street to appear before the Oireachtas finance committee.

His main topic of discussion was the EU’s proposed common consolidated corporate tax base (CCCTB). This commission proposal would allow companies to submit one centralised tax return across all EU countries in which they operate.

Their taxable profits would be split between the member states they operate in, with states retaining the right to set their own tax rate. The Irish Government has strongly resisted the move, claiming it would sharply reduce corporate tax take.

Moscovici, for his part, rejected that assertion. “No, I think it does not reduce tax revenues here in Ireland,” he said. “The impact assessment showed a very slight impact [on corporate tax revenues] but did not take into account the positive effect for our common growth. This proposal is good for Ireland.”

Noonan however was singing from a different hymn sheet. “Contrary to common perception, the EU plan would lead to lower receipts from corporate tax, not higher,” he said.

Addressing the parliamentarians later on, Moscovici insisted the policy could not be introduced without the say-so of the Republic. “Ireland can be reassured that there won’t be a CCCTB if Ireland doesn’t want it,” he said.

Furthermore, Moscovici said the European Commission was “open to compromise” on the matter. “This proposal is not take it or leave it,” he said. “It’s a proposal open to compromise. What I only want is that it can be discussed in good faith and goodwill.”

Moscovici praised Ireland for actively contributing to the EU tax agenda, and rejected the suggestion it is a tax haven.

“While Ireland has not always played fair in the past it has done impressive work to tackle tax avoidance and support the agenda for fairer taxation,” he said. “The phasing out of the ‘double Irish’ is very crucial.

“I’m also impressed that Ireland has been a leader in some of the tax actions, for example legislating for country-by-country reporting to the tax authorities and it is also one of the few member states to have mandatory disclosure for advisers.”

Across the Atlantic, the United States has now had a full week with Donald Trump in the Oval Office.

The markets have continued to respond favourably and, on Wednesday, the Dow Jones Industrial Average stock market index breached 20,000 points on Wall Street for the first time.

Trump took to his Twitter account to hail the event. “Great! #Dow20k” he wrote. The blue-chip index has surged by almost 10 per cent since he won the election, outpacing gains by the S&P 500 and Nasdaq Composite.

Building material manufacturer CRH, which makes up 30 per cent of Dublin’s Iseq index, surged to within a whisker of an all-time high that same day amid growing optimism over Trump’s infrastructure spending plans.

Among a raft of executive orders signed by the new president was the withdrawal of the United States from the proposed Trans-Pacific Partnership (TPP), the signature trade deal negotiated by former president Barack Obama though not yet in force.

Trump also ramped up his threats against the business community, pledging to introduce a “very major border tax” on products sold by American firms which move their factories overseas.

The former businessman also moved to distance himself from some of his companies so as not to give the appearance of conflicts of interest. He has pledged to move his assets into a trust. He resigned from two companies that operate the Trump Doonbeg resort in Co Clare.

There were more developments in relation to Britain’s exit from the European Union, with the UK Supreme Court ruling that parliament must give permission to start the process.

That led prime minister Theresa May to introduce legislation which will have to be rushed through the House of Commons within a fortnight to make the March deadline for triggering article 50.

Minister for Finance Michael Noonan said he expects the process to take at least six years between exit talks and the negotiation of a new trade deal. That is significantly longer than the two-years proposed by May, but that is how long Noonan estimates it would take to negotiate a new trade deal, as well as the exit package.

Noonan said the Government was “acutely aware” of the potential risks for Ireland, but that the Government has been undertaking “an extensive programme of engagement” with all other EU governments.

The Central Bank downgraded its growth forecasts for the economy a bit , highlighting Brexit as the chief risk to recovery.

In its latest quarterly bulletin, the bank said gross domestic product (GDP) was now forecast to expand by 3.3 per cent this year, down 0.3 per cent on its previous projection. This reflects the weaker outlook for exports.

There was some good news as Barclays settled on Dublin as its main hub in the EU after Brexit. It plans to add about 150 staff here if UK-based finance companies lose easy access to the trading bloc, according to sources.

Almac Group, a Northern Ireland-based contract pharmaceutical development and manufacturing company, is making a multimillion euro investment in a new Dundalk premises to maintain access to the EU market. The new plant will deliver 100 new jobs within the first two years.

Credit Suisse is still keeping its cards close to its chest, but it’s understood to be exploring options in Dublin, which is said to be emerging as a favoured location for the bank’s so-called back-office jobs.

Finance firms moving to Ireland post-Brexit will have to ensure that management of the operations is also based here to win regulatory approval, the Central Bank said.

Dough not rising at bakery giant

Swiss-Irish food group Aryzta has been lurching from crisis to crisis in recent years, but few more alarming than the 32 per cent collapse in its share price this week.

Chief executive Owen Killian is under severe pressure, having been struggling to halt a slide in investor confidence even before a profit warning on Tuesday sent the shares into near free-fall.

The global bakery giant said its underlying earnings per share was tracking about 20 per cent behind last year in the five months of trading ending December 2016.

“The underperformance is due largely to north American weakness compounding the already anticipated weakness in Europe due to the ongoing German bakery commissioning and the impact of Brexit,” Aryzta said.

The company’s need to refinance €600 million of debt in the next year has become more difficult as a result of all this. John Ennis, an analyst at Wall Street giant Goldman Sachs, said refinancing the debt was “incrementally more difficult” post the profit warning.

ESB swings from profit to loss due to impact of Covid-19 08:04
Gabriel Makhlouf: ‘A full second lockdown would be very serious for the economy’ 07:35
Ulster Bank could close, consumers remain cautious, and Decathlon booms 06:30
Mark Paul: Government faces dilemma on which businesses to save 06:09
‘I just thought it sounded exciting and different’ 05:34

1 NatWest considers closing Ulster Bank in the Republic
2 Mark Paul: Government faces dilemma on which businesses to save
3 Ulster Bank could close, consumers remain cautious, and Decathlon booms
4 Has NatWest finally run out of patience with Ulster Bank?
5 ‘I just thought it sounded exciting and different’
6 Cliff Taylor: What permanently low interest rates mean for you as a saver or borrower
7 What’s happening with the pandemic unemployment payment?
8 Gabriel Makhlouf: ‘A full second lockdown would be very serious for the economy’
9 Almost 300,000 customers visited Decathlon since June opening
10 Dublin-based Fenergo considers $1.5bn listing
Real news has value SUBSCRIBE