‘We were misled by the banks’, Gormley tells banking inquiry 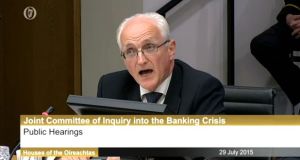 Former leader of the Green Party John Gormley has told the Oireachtas banking inquiry that the State’s bank guarantee was the “least-worst option” available to the Government at the time and that they were “misled by the banks”.

The decision by the Government to guarantee the banks was taken at a meeting in Government Buildings on the night of September 29th, 2008.

He did not attend the meeting and under questioning he said his presence would not have changed one thing.

Mr Gormley said: “We were told this was a liquidity problem, not a solvency problem. We were misled by the banks.

“I am sure that there must have been some individuals in the bank who knew situation was pretty dire.” Mr Gormley said that was his view but he had no evidence to back up his claims.

In his opening statement to the inquiry, Mr Gormley said: “I would say, given the conditions and the level of knowledge at our disposal, the guarantee was probably the least worst option.

Mr Gormley was a member of the Fianna Fáil-led Coalition government at the time of the bank guarantee.