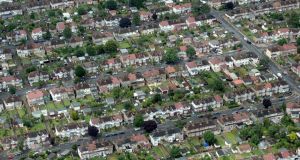 The number of mortgages approved rose by 52.8 per cent year-on-year and 6.6 per cent month-on-month, the figures show.

Mortgage approvals have jumped 42 per cent as first time buyers seek to get on the property ladder ahead of the introduction of new lending restrictions.

A total of 23,796 mortgage approvals have been recorded for the year to the end of November, according to figures compiled by the Banking and Payments Federation Ireland (BPFI).

A total of 2,752 approvals were made on average each month over the period September to November, 92 per cent of which were for house purchase.

Many attribute the surge in mortgage approvals to moves by first-time buyers to get on the property ladder before the Central Bank introduces tighter limits on mortgage lending. The bank is proposing that borrowers should have a minimum of 20 per cent deposit in place before being approved for a home loan.

The Central Bank also wants lenders to cap the size of mortgages at 3.5 times income. The proposed changes were announced in October, with December 8th set as the closing date for its consultation process. It wanted the limits introduced on January 1st, but governor Patrick Honohan has since admitted it is unlikely to happen by this date.

The number of mortgages approved rose by 52.8 per cent year-on-year and 6.6 per cent month-on-month, the figures show.

The value of mortgages approved per month, on average, in the three months ending November 30th was €502 million, of which €477 million, or 95 per cent of all approvals, was for house purchase.

The figures show the value of approvals increased by 56.4 per cent year-on-year and by 7.7 per cent month-on-month.

The BPFI represents over 70 member institutions and associates, including licensed domestic and foreign banks and institutions operating in the financial marketplace here.

A number of critics have called on the Central Bank to backtrack on its proposed meausres. In a recent submission to the bank’s mortgage lending consultation, the Department of Finance said requiring first-time buyers to come up with a deposit of 20 per cent to purchase their first home was “unduly restrictive” and would make it impossible for many to secure a mortgage.