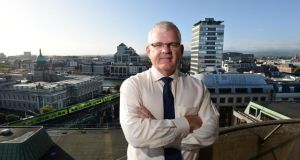 Bill Kyle, chief executive of Irish Life: the launch of a new enhanced annuity is a highlight in the quarter. Photograph: Dara Mac Dónaill /The Irish Times

Irish Life contributed €57 million to the earnings of its Canadian parent company Great-West Lifeco in the third quarter of this year, the company said yesterday. This represented a 50 per cent rise on the previous three-month period.

This brought Irish Life’s earnings contribution for the first nine months of this year to €129 million, “demonstrating the strength of its position as Ireland’s largest life insurance and pension company”, its parent company said.

In the three months to the end of September, Irish Life generated €1.5 billion of sales and €101 million of Great-West Lifeco’s fee income, the Canadian company said.

“A highlight in the quarter was the launch of a new Irish Life enhanced annuity,” said Bill Kyle, Irish Life’s chief executive. “This innovative product allows us to offer higher retirement income to people who have experienced poor health.”

The restructuring costs amounted to about €4.2 million during the third quarter and €13.4 million for the first nine months of the year.

In 2013 the group incurred restructuring costs of about €42 million in the third quarter.

Great-West Lifeco acquired Irish Life from the State in July 2013 for €1.3 billion. The company had previously been part of the Irish Life & Permanent listed financial services group, which was bailed out by the State in 2011.

Great-West Lifeco said its European insurance and annuities sales were about €2 billion in the third quarter, a 12 per cent year-on-year reduction due primarily to lower UK payout annuity sales and lower fund management sales in Ireland.

The Canadian group reported total net earnings of Canadian $687 million (€486 million) in the third quarter, up 31 per cent on a year earlier.