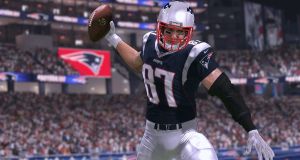 A still from the Madden NFL computer game

Electronic Arts, maker of the FIFA and Sims video games, is creating a new e-sports football competition that will allow players to compete on behalf of their favourite pro teams for the first time.

Registration for the Madden NFL Club Championship, which is based on the Redwood City, California-based company’s popular football title, starts on Monday. Through live and online elimination events, one player will qualify to represent each National Football League team, culminating in a final during Super Bowl week next February in Minneapolis.

“Every fan of the NFL, every Madden player, has always dreamed of playing for their favourite team,” Todd Sitrin, general manager of Electronic Arts’ two-year-old, competitive gaming division, said in an interview.

Esports, where players vie in tournaments before live and online audiences, has become a big focus for game companies. Activision Blizzard and Riot Games, owned by Tencent Holdings, are selling franchises for teams based on their Overwatch and League of Legends titles. Take-Two Interactive Software plans events next year tied to its NBA 2K18 game. Electronic Arts’ tournament coincides with the new Madden NFL 18 game going on sale Tuesday.

Andrew Wilson, Electronic Arts’ chief executive officer, said in a June interview that he views tournaments as an opportunity to build excitement for the company’s games, unlike Activision CEO Bobby Kotick, who sees esports as a major new revenue source, generating profits from ticket sales, merchandise and TV rights.