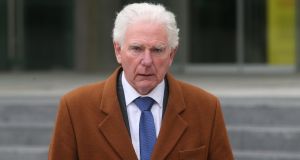 John Mulholland, 70, from Salthill, Monkstown, Co Dublin, and three others were charged with misleading investors as to the where and how assets were placed in CHC. Photograph: Collins Courts

They were arrested on Friday in Dublin by Garda National Economic Crime Bureau (GNECB) detectives.

They appeared at Dublin District Court before Judge Bryan Smyth, who remanded them on bail to appear again on July 31st when they are to be served with books of evidence and returned for trial.

All four are charged with misleading investors as to the where and how assets were placed in Custom House Capital, contrary to common law. The offences are alleged to have happened between October 2008 and July 2011.

The Director of Public Prosecutions (DPP) has directed trial on the indictment in the circuit court.There was no objection to bail subject to conditions to which each defendant consented.

Detective Garda David Coyne told Judge Smyth that Mr Mulholland made no reply to the charge. Bail was set in his own bond of €1,000 and the Garda also sought a €10,000 independent surety in his case.

Detective Garda Coyne requested the surety because Mr Mulholland had an address in the North, in Co Antrim, where he had previously resided. His daughter Zara was approved by the court to stand bail.

She agreed with Mr Mulholland’s solicitor, Richard Young, that she understood the charge against her father.

The co-defendants were remanded on their own bonds of €500. Mr Whyte also made no reply to charge, said Detective Sergeant Alan Govern.

His solicitor Pádraig O’Donovan said his client was making an application for legal aid and he handed in a vouched statement of Mr Whyte’s means. Granting it, Judge Smyth noted there was no Garda objection.

The court was told that Ms Kelleher’s reply to charge was: “I am innocent.” Her solicitor Michael Hennessy deferred her legal aid application, saying he would furnish documentation on the next date.

All four were ordered to reside at their current addresses, surrender passports and not to apply for new travel documentation and to “have no contact directly or indirectly with co-accused or any witnesses in the case”.

They also had to provide the Garda with their mobile phone numbers and must sign on once a week at their local Garda stations.

None of them addressed the court.