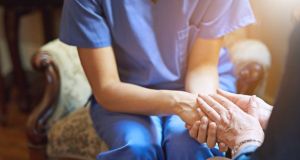 Overall, about 45 per cent of people have private health insurance cover, giving them faster access to treatments

The average premium paid per insured person in 2016 was €1,177, compared with €1,173 in 2015 and €1,200 in 2014. These figures are based on gross premium levels, with child premiums and young adult discounts having a lowering effect on the average figure.

Total health insurance premiums, gross of tax relief, paid in 2016 was €2.5 billion. This represented an increase of 2.7 per cent from 2015.

The latest figures come as Ireland’s second-largest healthcare insurance provider Laya on Friday announced plans to increase most of its policies by an average of 6 per cent.

Overall, about 45 per cent of people have private health insurance cover, enabling them to get faster access to treatments, many of which are delivered in public hospitals by doctors who serve both public and private patients.

Earlier this month, Fine Gael and Fianna Fáil TDs joined together to block a plan to abolish tax relief on private health insurance, in what was seen as a significant blow to proposals to separate the public and private healthcare systems.