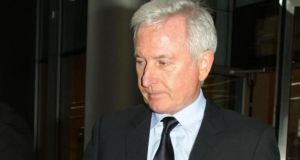 Belfast investor Paddy McKillen: He contends communications fully or partly disclosed by the department to date suggest it was being “inappropriately” lobbied by interests linked to the UK billionaire Barclay brothers concerning acquisition of his “fully-performing” loans as part of a hostile takeover. Photograph: Yui Mok/PA Wire

A judge will rule later on an application by property investor Paddy McKillen aimed at securing full access to 12 documents he believes will show the Department of Finance engaged in “inappropriate” contacts with others about his loans with State-owned IBRC and Nama.

Mr Justice Seamus Noonan heard final arguments on Wednesday in the action by Mr McKillen over the Information Commissioner’s rejection of his complaint over the department’s refusal to hand over the documents. The judge said he will give his judgment on a later date.

In his November 2014 decision, the commissioner upheld arguments by the department that 11 of the documents could not be fully handed over for contempt of court reasons. The contempt issue arose from the 11 documents already being subject to a High Court discovery order sought by Mr McKillen in other proceedings.

The department said a 12th document was exempt on grounds it contained commercially sensitive information which it was not in the public interest to disclose. That information related to potential bids for acquisition of Mr McKillen’s loans.

In his challenge, Mr McKillen contends communications fully or partly disclosed by the department to date suggest it was being “inappropriately” lobbied by interests linked to the UK billionaire Barclay brothers concerning acquisition of his “fully-performing” loans as part of a hostile takeover strategy relating to the London-based Maybourne hotel group.

Mr McKillen was the largest shareholder in the Maybourne hotel group when it was subject of a takeover bid launched by the Barclays in 2010 and 2011.

In his final arguments, Brendan Foley BL, for the commissioner, said Mr McKillen already has the necessary information to pursue his complaints against the Department and did not need the additional documents sought.

In his closing arguments, Mr O’Callaghan said there was no reference in the commissioner’s decision to the inappropriateness of persons contacting the department to lobby it concerning Mr McKillen’s loans. The commissioner was required to consider that matter for the purpose of ascertaining the public interest but had not done so, he said.