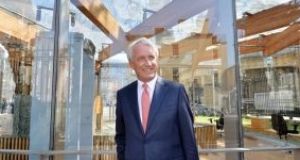 Clydesdale shares were priced at 180 pence

Shares in Clydesdale Bank,which is run by Irish man and former AIB chief executive David Duffy, rose as much as 2.4 per cent in early trading on Wednesday in their London debut, after the nearly 180-year-old British lender raised £395.7 million.

Clydesdale shares were up 0.7 per cent at 181.25 pence in early trading after being priced at 180 pence on Monday, having been spun off by National Australia Bank (NAB), Australia’s biggest lender by assets.

NAB had delayed the float by 24 hours to update its listing prospectus after a request for more information from a rating agency.