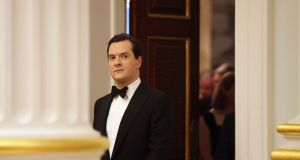 Britain is ready to start selling its shares in Lloyds Banking Group and will examine whether to break up Royal Bank of Scotland, finance minister George Osborne said, admitting the re-privatisation of RBS remains a long way off.

The government is keen to show Britain’s part-nationalised banks are recovering from the 2008 financial crisis and a profitable sale of part of its 39 per cent stake in Lloyds would allow it to claim at least partial success ahead of the next election in 2015.

Mr Osborne’s decision to investigate hiving off RBS’s weak assets, largely soured property loans in Ireland and Britain, into a so-called “bad bank” comes after a parliamentary commission he appointed recommended such an analysis earlier today.

The finance minister had previously dismissed breaking up RBS as too costly and disruptive and in his annual address to financiers in the City of London he said such a split would only happen if it was in the best interests of taxpayers and didn’t require them to put any additional capital into the bank.

“We will establish a Bad Bank if it meets our three objectives: if it supports the British economy; if it’s in the interests of taxpayers - and if it accelerates the return to private ownership,” he said.

The review, which will be completed in the autumn, marks another jolt for Royal Bank of Scotland, whose chief executive Stephen Hester was ousted last week with the green light from Mr Osborne.

RBS’s chairman said he welcomed the government’s plans. “Proposals that could speed RBS’s privatisation while allowing us to support our customers deserve thorough consideration.

Ultimately any change to our strategy would need to be in the interests of all shareholders,” Philip Hampton said in a statement. The government pumped a combined £66 billion into the banks to keep them afloat during the 2008 financial crisis leaving it with an 81 per cent shareholding in RBS and 39 per cent of Lloyds.

Mr Osborne said the government was willing to discuss how RBS can buy its way out of a dividend access share, which gives the state priority over dividends and has been seen as a major obstacle to privatisation, once the review into the bank’s future had concluded.