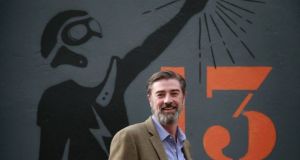 Energy-saving lighting specialist UrbanVolt has recently signed a series of big contract wins in the US, including with two leading Fortune 500 companies.

The Dublin-headquartered company, which only fully entered the US market earlier this year, said it intended to significantly ramp up operations there with plans to create 100 jobs over the next three years to aid its growth in the region.

UrbanVolt, which agreed a €55 million debt facility with British investor Low Carbon earlier this year to fund its international expansion, also said it expects to raise additional funds in the new year. It previously secured a €30 million investment from Swiss investment group Susi in 2016.

The company, which is led by Kevin Maughan, fits LED lights to businesses and industries at no charge to the user, but instead gets paid by sharing the savings on their customers’ energy bills over a five-year period. Speaking to The Irish Times, Mr Maughan said the recent contract wins were worth a combined seven-figure sum, with a number of the deals having been agreed with companies with whom it has worked with in the Republic.

Founded in 2015, the company has offices both in Chicago and Florida, where it intends to establish its US headquarters. UrbanVolt, which was this week announced as the European winner of Google’s ‘Adopt a Startup’ final, also operates in the UK, Germany, Spain and the Netherlands.

Mr Maughan said the company has a number of large roll-outs planned for early 2019. “One client wants us to look at 14 of their factories around the world and another one has over 20 so things are looking great for the new year,” he said.

Given the company frontloads all of the costs associated with customers using its services, Mr Maughan said he expected losses to continue to rise in the short term. However, he said the company has €10 million in long-term revenues signed up and he predicted it would be in profit within two years with about €6 million in annual recurring revenues predicted for the end of 2019.

The latest accounts show the company secured an additional €1.9 million in equity last month through the sale of a number of ordinary shares.

Mr Maughan said the company is about to go live with a new online calculator on its website, which he said would allow prospective customers to get an accurate estimate on savings from using LED lights immediately, compared to an industry average waiting period of weeks.