Energy demand has soared in recent years, with prices among highest in Latin America 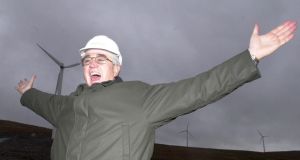 Eddie O’Connor’s Mainstream Renewable Power has won contracts from the Chilean government to build and run $1.65 billion (€1.46 billion) of wind and solar plants.

The company was one of the main beneficiaries of what was the most competitive and biggest electricity tender in the country’s history. The auction attracted 84 bids from Chile and abroad, including European firms Gas Natural, Ibereolica, Acciona Energia, Austrian Solar and Solairedirect.

Demand for energy has soared in recent years in Chile, which has among the highest power prices in Latin America and an energy-intensive mining industry that produces more than a third of the world’s copper, much of it from remote desert areas. It also has some of the largest reserves in the world for lithium, which is used to make batteries for smart phones and electric cars.

In all, Chile’s renewable energy auction equates to about a third of supply to regulated customers in Chile. Mainstream’s allocation equated to about 27 of the total allocations awarded for power to be supplied into the system from January 2021.

The contracts “have turned the [local] electricity market on its head,” said Bart Doyle, the general manager of Mainstream’s operation in Chile.

“Unlike in Europe, most of the conventional players in the market haven’t invested in solar or wind energy. The country has three or four large incumbents but only one of them, Endesa [a unit of Italy’s Enel], has any renewable projects.”

Endesa Chile was the only long-established local company to win a contract. Mainstream, which entered the Chilean market in 2009, has build up the most comprehensive portfolio of wind and solar projects in the country, extending to over 2,000 megawatts, it said in a statement.

Mr Doyle said Mainstream intends to use some of the proceeds from the group’s current equity-raising efforts to part fund the plants, with the remainder from bank funding. Financing for the initial part of the Chilean projects is likely to be in place by mid- to late-2017, he said.

“Today’s win underpins Mainstream’s standing as the leading independent renewable energy company in high-growth emerging energy markets,” said Mr O’Connor in a statement earlier on Wednesday. “We had the industry foresight to take early positions in Chile and South Africa and we are rolling-out similar plans across Africa, Central America and Asia.”

Mr O’Connor set up Mainstream in 2008 after the sale of Airtricity, which he founded two decades ago. Mainstream plans to open grey market trading in its stock after it completes a €100 million-plus share sale later this year.

A long-awaited initial public offering of the business is most likely to take place in 2018, Mr O’Connor said earlier this year. Having previously weighed a Hong Kong listing, the company will now probably target New York.

The Chilean contract follows the Mainstream’s sale last month of a $117.5 million stake in in Lekela Power, an African wind and solar energy joint venture set up by Mainstream and British-based private equity firm Actis. The new investors in the venture include the Rockefeller Brothers Fund, a philanthropic foundation set up by a family which made its fortune in oil, and International Finance Corporation, a member of the World Bank.