Agreement will see continuation of mining for another 10 years 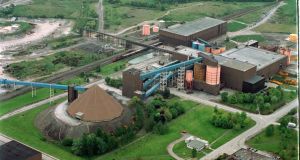 The Navan mine is the largest zinc mine in Europe. It was purchased by Swedish company Boliden in 2004.

Some 650 jobs are to be saved in Co Meath, after the Government agreed a new deal with the owners of Tara Mines, which will see the continuation of mining for another ten years.

The terms of new leases also allow for the substantial underground exploration and extension of the mine.

The announcement was made during a visit to Tara Mines today by Minister of State for Natural Resources Fergus O’Dowd.

Earlier this year, workers at the mine were placed on protective notice as the firm tried to reduce costs. Management and unions ultimately reached an agreement that will see overtime costs reduced, and the company investing €110 million in the mine to maintain its operation to 2018 and beyond.

Stefan Romedahl, the recently appointed general manager of Boliden, which owns Tara Mines, said the company was pleased that negotiations around the extension lease have been concluded.

“A stable platform has been established and we need to continue to reduce costs in order to make Tara profitable”.

Siptu organiser John Regan said the announcement was “good news” for the 650 workers employed at the mine, and the estimated 3,000 people employed in jobs dependent on the operation of the miners.

“In a climate of uncertainty for workers this new agreement on the leasing of mining rights with Boliden, the company which owns Tara Mines, until 2023 gives those employed there a welcomed degree of certainty.”

The Navan mine is the largest zinc mine in Europe. It was purchased by Swedish company Boliden in 2004.