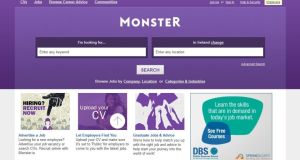 Monster, the Real Madrid to Indeed.com’s Barcelona, has come on board as a sponsor of National Employment Week.

There is sure to be a little extra spice in the rivalry between the two behemoth online jobs sites, Indeed. com and Monster, following National Employment Week, which kicks off on Monday.

National Employment Week is supported by Sigmar Recruitment, the agency run by Robert Mac Giolla Phadraig. He is listed to speak at an event, the Talent Summit in the Mansion House, which takes place next Wednesday. Others on the ticket include executives from Cartrawler, Oracle and Microsoft.

The managing director of Indeed’s European headquarters in Dublin, Gerard Murnaghan, was in January invited by Sigmar to take part in a panel debate at the Talent Summit. Decent choice: as well as being an online recruiter, Indeed has also created more than 200 jobs of its own down at Silicon Docks. Monster, the Real Madrid to Indeed’s Barcelona, has come on board to join Sigmar as a sponsor of National Employment Week.

Lo and behold, Indeed, which has about 150 million visitors to its websites each month, was recently informed by the organisers that its services are now no longer required on the Talent Summit panel debate.

Somehow, I doubt the job site’s executives are all that impressed at getting the bullet.