Planet Business: 2020 gets off to a flying start 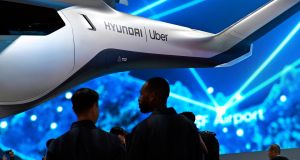 Image of the week: Fly now

The decade has got off to a suitably sci-fi note at the much-maligned Consumer Electronics Show (CES) in Las Vegas, where Hyundai has unveiled the prototype for a flying car that it plans to mass produce and deploy through Uber’s mooted air taxi service. The South Korean company’s electric aircraft, which will take off and land vertically like a helicopter, is designed to carry up to four passengers and a pilot and fly on trips of up to 100km. While Uber hopes to launch Uber Air in some cities by 2023, Hyundai dates the commercialisation of “urban air mobility” to 2028, citing the pesky matter of laws and regulations. It’s not the only automotive company keen to make flying cars a reality: Daimler, Toyota, Volkswagen and China’s Geely Automobile are among those also working on it. Welcome to the new era of air rage.

In numbers: Held to ransomware

Number of countries in which Travelex, owned by FTSE 250 company Finablr, took down their website on New Year’s Eve. The foreign currency business was forced to put its network offline after it was infiltrated by malware known as Sodinokibi or REvil.

Sum that the hackers are demanding from Travelex through the ransomware. If Travelex complies, the hackers will delete sensitive customer data such as dates of birth, credit card information and other personal numbers: if it doesn’t, the information will be sold on, they say.

Gigabytes of customer data that the gang says it has downloaded since first accessing the company’s network six months ago.

Getting to know: Carole Ghosn

Carole Ghosn is the wife of Carlos Ghosn, the former Nissan boss turned global fugitive. Mr Ghosn saw out 2019 by hiding in an audio equipment box in order to board a private jet and leave Japan, where he had been under house arrest on charges of financial misconduct. Having successfully skipped bail – railing against Nissan and the Japanese legal system in the process – Brazil-born Carlos is now busy giving his side of the story in Lebanon, where he was raised. His Beirut-born second wife, Carole, who he married in 2016 at the Palace of Versailles, is also there, which is good news for her as prosecutors in Tokyo this week issued a warrant for her arrest on suspicion of making false statements in court and Lebanon has no extradition treaty with Japan. A spokeswoman for the Ghosn family described the warrant as “pathetic”, while Carole herself has been lamenting the French. Her husband, the former head of Renault, is also a French citizen, but the Macron government hasn’t done enough to help: “They’ve forgotten everything Carlos did for France’s economy and for Renault.”

Christmas pudding sales are on the wane, according to market research firm Kantar, but some trends are only warming up in their efforts to part consumers with their money. Here are five that could be plaguing us or become the source of all joy in our lives this year.

1. “Plant-based pork.” An oxymoron, perhaps, but that’s the term being used by US giant Impossible Foods, which is hoping to give Beyond Meat a run for its money in the fast-expanding meatless meat market.

2. Puffed sleeves. Beloved of both Anne of Green Gables and a parade of stars on this year’s Golden Globes red carpet, fashion editors claim giant sleeves will be billowing out of civilian wardrobes throughout 2020.

3. Disney Plus. Available in Ireland and several major European markets from March 31st, the service is likely to generate large volumes of pester power over the months ahead.

4. Wearable tech. Could this be its year? Research firm Gartner predicts that the market will soar 27 per cent, taking it past the $50 billion mark.

5. Wallpapered ceilings. Recently identified as a 2019 trend by retailer John Lewis, the bright idea of putting wallpaper on your ceiling is set to become some hot interior design clickbait at the very least.

1 Who are Ireland’s 17 billionaires?
2 My father in a nursing home wants to gift me his house
3 Are there annual limits on inheritances or gifts to a child?
4 State subsidises public sector retirees to cover gap until State pension
5 Avolon executives share €27m in pay as revenues soar
6 O’Flynn company ‘mistakenly’ got go-ahead for Birmingham project
7 Proinsias O’Mahony: Should investors ‘drop their shorts’?
8 Swiss police suspect Davos plumbers of being Russian spies
9 Northern Ireland drops campaign for lower corporation tax rate
10 Help, I’ve no PRSI stamps – can I still get a pension?
Real news has value SUBSCRIBE