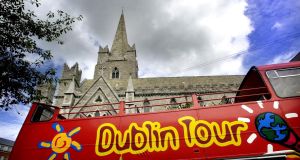 The State’s tourism sector could be in decline, according to the boss of Fáilte Ireland, resulting from the Government’s decision to increase the hospitality VAT rate in last year’s budget

Dublin’s labour marketis now as tight as central London’s, according to a study by the Central Bank and recruitment website Indeed. The research found that there were roughly two unemployed people for every job vacancy in Dublin, which put the Irish capital on a par with central London, one of the most competitive labour markets in the world. Eoin Burke-Kennedy reports.

The State’s tourism sector could be in decline, according to the boss of Fáilte Ireland, resulting from the Government’s decision to increase the hospitality VAT rate in last year’s budget. He also tells Peter Hamilton about the potential cost of a no-deal Brexit to the tourism sector.

On the issue of Brexit, new research shows a majority of Northern Irish consumers believe they’ll be left worse off as a result of the UK’s withdrawal from the EU, with concerns over cross-Border travel and grocery supplies.

Suzanne Lynch reports from Washington on the growing concerns that Irish food products could be hit by damaging US tariffs, as Washington prepares to impose retaliatory measures on a range of EU goods over a long-running WTO dispute over Airbus. Irish whiskey, in particular, is in the firing line.

In discussing the latest book from French economist Thomas Piketty, Chris Johns writes thatmonopolies, particularly of the tech variety, have been allowed to get away with financial murder. “Piketty’s calls for greater taxation of wealth and more aggressive redistribution have, for the most part, been ignored by politicians. That, I suspect, may be about to change.”

Finally, in her column this week Pilita Clark laments that in the business world tedious and outdated sexist jokes are sadly not outliers.

1 Four things that could help Ireland escape the Covid-19 recession
2 Ross O’Carroll Kelly column 'not racist towards English people'
3 Brown Thomas and Arnotts shoppers will be able to book time slots for entry
4 What is in the EU’s €750bn recovery plan and how will it affect Ireland?
5 Irish banks’ failure to innovate could leave them written off for good
6 Tax and the Pandemic Unemployment Payment: Your questions answered
7 Job losses in tourism and retail in Dublin could be permanent, new report warns
8 Paschal Donohoe sees consumer ‘prize’ in slow reopening of economy
9 Irish economy to contract by 12%, ESRI forecasts
10 Beware of the rush to get back to normal business amid Covid-19
Real news has value SUBSCRIBE