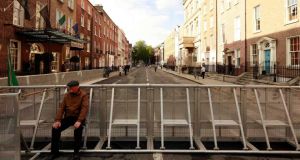 The Government slicked on the gloss yesterday and got down to some long, slow and serious general election seduction.

The Austerity Twins have left the building.

Now say hello to The Corner Boys. And they want to let everyone know that they’ve turned it.

Michael and Brendan made no bones about this yesterday when they delivered their PR budget. If anyone asks, they won’t deny it.

Of course, it’s a PR budget, they will say. P is for Prudent and R is for Responsible.

Nothing to do with carefully cranking up the good news quotient as the calendar runs down to polling day in a year or so.

Nonetheless, yesterday afternoon they moved away from major cutback to “minor easement”. Our Ministers for Tax and Slash began restyling themselves as Less Tax Noonan and More Cash Howlin.

Their offering for 2015 just some light relief to tee us up for next year’s budgetary statement.

You wouldn’t want to be a betting woman to predict it’ll be a lot better than yesterday’s optimistically neutral offering.

The Opposition spotted their game a mile away. It’s standard practice.

“This is all about using borrowed money to buy votes,” said Michael McGrath, responding on behalf of Fianna Fáil and sending Government backbenchers into hoots of derisory laughter. “You’d know!” they chortled.

“You’re not invincible,” he huffed across to the Taoiseach, who had been sitting during his Ministers’ speeches with a smugly martyred look on his face. After years of abuse for austerity, Enda was luxuriating in a spot of light vindication.

Behind him, the lobby fodder looked happier than they’ve been for a long time. Since 2011, they have had to sit, silently, through some vicious budgets, afraid to crack as much as a smile and dreading the onslaught to come in the constituency clinics.

They took a while to warm up as Noonan outlined his “road map” for the coming 12 months. His GPS (government positioning strategy) indicated taking the road “less travelled by”.

Using Robert Frost’s poem The Road Not Taken as his starting point, Minister Noonan asked: “Do we take the road frequently trodden by Irish governments in the past?”

“You certainly have!” shouted Gerry Adams. “A road whose signposts are ‘Tax’ and ‘Spend’ and where one’s journey is through boom and bust?”

No. Michael was choosing to take the PR route to the next election. “A road whose milestones are ‘Prudence’ and ‘Caution’ … a new road to a new Ireland.”

That’ll cost a few bob. Watch this space, as both Ministers said, hinting at better things to come.

“I know what road the Government will take,” said Noonan.

After that – and the final blockbuster budget – it’s in the hands of the electorate as to whether the Government runs out of road or stays for a second term.

Speaking of budgets, the Dáil had to clear up some housekeeping before The Corner Boys got the chance to take their turn.

Fitzmaurice was first to make an entrance. He was escorted into the chamber by Independent deputy Thomas Pringle to applause from all sides. Deputy Fitzmaurice looked slightly overawed by the occasion, shaking hands with the Taoiseach, Tánaiste and Opposition leaders before taking up a seat beside Joan Collins.

Joe’s normally rather austere demeanour was missing. In fact, he was smiling so much that he seemed a little embarrassed by himself.

Paul was supposed to be the recipient of the ceremonial handshakes, but Joe was so happy that he shook everyone’s hand too. Then it was down to the real meat of the day.

Michael Noonan rose early to begin his speech, perhaps a sign that he was looking forward to this one.

And what about the colour of his tie? These things are important, not least to those from the betting fraternity. It was a nice shade of pink, reminiscent of blooming heather.

Maybe a show of support for the Minister for the Arts, the lesser-spotted Heather Humphreys, who made an appearance on the front bench. She even got a few bob for her department.

Brendan Howlin went all out in the tie department and opted for Deep Purple.

The substantial budget statements were bound in different covers. Noonan’s featured colourful silhouettes of teachers and nurses, construction and office workers, students and men in caps and mammies. In Howlin’s one, all the figures were blue. Was this some sort of message?

Still, Labour seemed happy with his speech and so too did their Fine Gael colleagues. Brendan was pleased to announce that the nation’s bottom line was “€2 billion better than we envisaged last year”.

When he announced extra social welfare payments, they cheered. And loudly when the return of the Christmas bonus for people on social welfare was outlined. “Sure you couldn’t take anymore off them,” harrumphed Waterford’s John Halligan. “Sorry about that!” shouted a gleeful Government backbencher to a glowering Opposition.

As both sides got giddy, the Ceann Comhairle told them to pipe down, reminding them that “hundreds and thousands” of people were watching them on television”.

We don’t know how many of them saw Sinn Féin’s Mary Lou McDonald getting thrown out of the chamber during her budget reply. The Ceann Comhairle interrupted her in full flow, instructing her to stick to the rules and address the chair. She took grave umbrage. And she had a point – Fianna Fáil’s spokespeople, and her own colleague Pádraig Mac Lochlainn had broken the rules and weren’t chastised.

She accused Seán Barrett of bias. He asked her to retract this. She wouldn’t. He ordered her out. And the rest of Sinn Féin followed her out. his gave them more scope for media interviews outside, following in the footsteps of Michael, Brendan and the rest of the Ministers, who had long since left to attend to their PR duties.

Meanwhile, deputies on all sides searched high and low for The Tripwire – that bit in the budget that always tumbles out to embarrass a government. They were hard-pressed to find one.

And as the evening gave way to night, one little vignette summed up the Government’s reaction to their new budget.

But there’s more to come after this Rev It Up budget. They are working to a plan. The lip gloss is on and the wooing has begun.

1 Solar panels: How do they work - and are they worth it?
2 Bank leaked my loan request to family who tried to rip me off
3 UK lays down red line for Brexit trade talks
4 Longview seeks permission for 753 homes in Cork’s outskirts
5 Kingspan and Greencore executives sell €11m in shares
6 When the Chemistry no longer works – the closing of a leading Irish ad agency
7 Ryanair and Aer Lingus monitor impact of coronavirus on travel to Italy
8 McEvaddy brothers to continue to back Irish aviation firm
9 Over $12m from sale of Walford handed over in Sean Dunne bankruptcy case
10 Boris Johnson's new immigration regime will damage much more than industry
Real news has value SUBSCRIBE