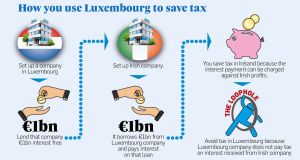 The corporate tax structures involving Luxembourg can seem nightmarishly convoluted, but in essence they are quite simple.

They save groups of companies tax by creating contrived “costs” that can be used to reduce the group’s taxable profits, but have little or no effect on its real profits.

The best way to understand the system is to think of a simplified example. In this example an Irish business sets up a new group company in Luxembourg and gives it an interest-free loan of €1 billion.

The Luxembourg company then loans the money, at interest, back to another new company, this one back in Ireland. This company then uses the money to invest in a new, and profitable, aspect of the group’s overall business.

There would be little point in the whole exercise if the profit the Luxembourg company was making (it borrows at zero interest and lends on at 5 per cent) was being taxed there.

But Luxembourg practice allows companies charge what is called “deemed interest” on interest-free loans. This imaginary interest charge, which can be thought of as the charge that might apply if the loan was a normal, commercial one, has the effect of reducing the Luxembourg company’s profits to close to zero.

Because it is close to zero, rather than actually zero, Luxembourg’s exchequer gets a small cut from the overall transaction. Luxembourg has a 29 per cent corporation tax rate.

In some of the tax structures contained in the PwC documents seen by The Irish Times, use is made of controversial financial products called hybrid instruments. They are called hybrid because the transactions can be seen as loans in one country, and dividend payments in another.

Hybrid financial instruments and their use in tax structures such as the one described above, have been strongly criticised by the Organisation for Economic Cooperation and Development.

1 Basic income for all: Has the Covid crisis given us a new economic model?
2 Direct sea routes to Europe offer certainty in choppy Brexit waters
3 Promontoria barred from pursuing doctor over Ulster Bank loan
4 ‘Make plans but don’t hold on to them too seriously’
5 A tale of two pandemics for Smurfit Kappa and Greencore
6 Flat Friday in Dublin market as Flutter joins Euro Stoxx 50
7 Online shoppers face unwelcome tax surprise
8 How long can Government afford to keep State pension age at 66?
9 Central Bank rules out changes to mortgage rules during pandemic
10 Career opportunities? The ones that just may knock
Real news has value SUBSCRIBE