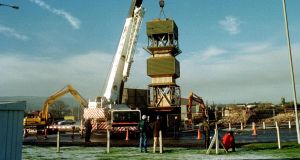 Removal of a vehicle checkpoint at the Border outside Strabane in Donegal: UK exit would be not just an economic shock, but also a backward step in the developing relationship between the North and the Republic. Photograph: Trevor McBride

In 1972, when I started working in the Department of Finance, one of my first jobs was to put away the files on Ireland’s external economic relations. These files dealt with trips to London by finance officials as mendicants seeking improved access for Irish exports to the UK market, especially for agricultural exports.

Four months later, when we joined the then European Economic Community (the EEC) in 1973, the issue of market access was no longer a problem. Instead a new vista opened up where Irish interests were protected by law and Irish civil servants, in advocating Ireland’s interests, were treated as equals.

If the UK votes to leave the EU, a Brexit, it is UK civil servants who will, instead, find themselves in the mendicant role, trying to get as favourable a deal for their country as possible. However, as with Irish civil servants in the 1960s, UK negotiators will be arguing from a weak position, hoping for the goodwill of their larger neighbour.

The economic consequences for Ireland of the UK leaving the EU would be unfavourable, though there would be pluses as well as minuses. Much more important for Ireland will be the political consequences, in particular, the implications for Northern Ireland.

Probably the greatest risk to Ireland in the last 50 years came from the instability in Northern Ireland. The Belfast Agreement in 1998 put in place a long-term solution to the internal problems of Northern Ireland, allowing the normalisation of the North’s economy and society. Anything that could destabilise that would be a major concern for Ireland.

At present, with Britain, Ireland enjoys a joint opt-out from the Schengen agreement, which means that immigration controls are not needed between Ireland and Britain. However, if the UK leaves, Ireland will automatically become a member of Schengen and it would be required to put up immigration controls to protect the external border of the Schengen area – in this case vis à vis the UK. This would crystallise the Border in a way never before experienced and it could cause major unrest in the North.

If the UK votes to leave, the first priority for the government will be to negotiate the option of an opt-out from Schengen. However, even if the government can achieve such an agreement with our EU partners, there is no guarantee that would be sufficient to permit continued free movement across the Border. The Irish government will need to engage further with both the EU and the UK to try to protect our national interests.

Further areas of importance for Ireland in the negotiations will include the details of a trade agreement between the EU and the UK, as well as policy on areas such as energy and climate change.

In the case of climate change, given the integrated electricity market on this island, it will be important that the UK continues to participate in the EU Emissions Trading Scheme. Also, a bilateral deal to secure access to gas supplies through the UK in the event of an emergency may be necessary.

Finally, the implications of a UK vote to remain in the EU also needs to be thought through. They are likely to be favourable for Ireland. In particular, such an outcome could end the ambivalent attitude of the UK to the workings of the EU. Instead of a semi-detached approach, the UK might actually begin to play a serious leadership role. While we might not always appreciate such leadership, it would be an improvement on the current situation where action depends only on German and French leadership.