Ireland to be EU’s fastest-growing economy in 2016

European Commission revises its growth forecast for Ireland upwards to 4.9% 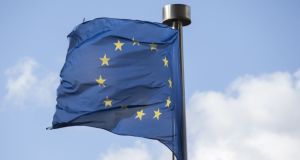 Ireland is predicted to be the fastest-growing economy in Europe this year according to new figures from the European Commission, with the EU’s executive arm expecting the economy to grow by 4.9 per cent this year.

The predicted GDP growth rate is higher than the figure of 4.5 per cent for 2016 estimated three months ago. The Commission also revised upwards its estimates for 2017 to 3.7 per cent, up slightly from the growth rate of 3.5 per cent predicted in February.

In its analysis of the Irish economy, the Commission states while Ireland appears resilient to the recent deceleration in world output, “the uncertainty surrounding external economic and policy developments invite some caution.” While it does not cite specific external threats to the economy, it states that Ireland is particularly exposed to external factors such as a deceleration in demand from trading partners due to its status as an open economy.

Regarding the housing market, the Commission expects that house price increases in Ireland will moderate as government measures to boost supply kick-in.

It also sounds a cautious note on employment trends. Noting that employment growth decelerated in the final quarter of last year, it says that unemployment is expected to decrease at a slower pace in Ireland than in earlier phases of the recovery.

The reduction in the deficit is welcomed by the Commission, which notes that the government’s deficit fell sharply to 2.3 per cent of gdp in 2015, compared to 3.8 per cent in 2014. It notes that the deficit would have fallen further to 1.3 per cent, but for the accounting treatment of the conversion of some of the state’s preference shares in Allied Irish Banks to ordinary stock in preparation for the bank’s sale.

But it notes that the strong deficit figures reflect the fact that tax revenues increased by 9.3 per cent last year, fuelled by an “unprecedented surge in corporate tax receipts,” which were 50 per cent higher than the previous year.

“Economic growth in Europe is expected to remain modest as key trading partners’ performance has slowed and some of the so far supportive factors start to wane,” the Commission states in its Spring Economic Forecast.

European Commission vice president Valdis Dombrovskis said that, while the economic recovery in Europe is continuing, the global context is less conducive than it was. “Future growth will increasingly depend on the opportunities we create for ourselves. That means stepping up our structural reform efforts to address long-standing problems in many countries - high levels of public and private debt, vulnerabilities in the financial sector or declining competitiveness.”